Highly commended in this year’s Print Award, Beth Ferialdi’s I’ve Been Meaning to Give You These is a playful homage to the mixtape of yesteryear. The cassettes feature thematic playlists of love and longing, with surprise acapella cameos from Ferialdi’s friends. The artist collaged together hand-cut paper from music and pop culture magazines from the 90s and early 2000s, building on the nostalgic appeal of this playful work.

Beth’s playlist will get a workout on Wednesday 14 July at the inaugural Print Party – an evening of art, talks and karaoke after dark to close out the 45th FAC Print Award. Keen to get involved? RSVP here.

Firstly congratulations on being highly commended in the 45th Print Award. How does it feel?

Thank you, I’m honoured to be a Print Award finalist this year and it was completely unexpected to be among the highly commended artists in the exhibition. The best way to describe how it feels is that I just tend to smile and slightly shake my head in disbelief. I was a finalist in the Print Awards previously and for the first time in 2019 with a collage piece called “Slow Mover”. This piece was a more traditional cut and paste style on paper, without such an interactive element, but again something that I hoped would evoke thoughts around feelings and emotions by the viewer as with the current piece. I was introduced to collage by a now very good friend of mine 3-4 years ago and was prolific in my creation for the first year or so as I fell in love with it and moved through trying to figure out my style. I am an untrained artist, I primarily create handmade collage pieces that sometimes bring in elements of lino print and other mediums. I would love to expand my knowledge and experience of other forms of printmaking to merge with my collaging. 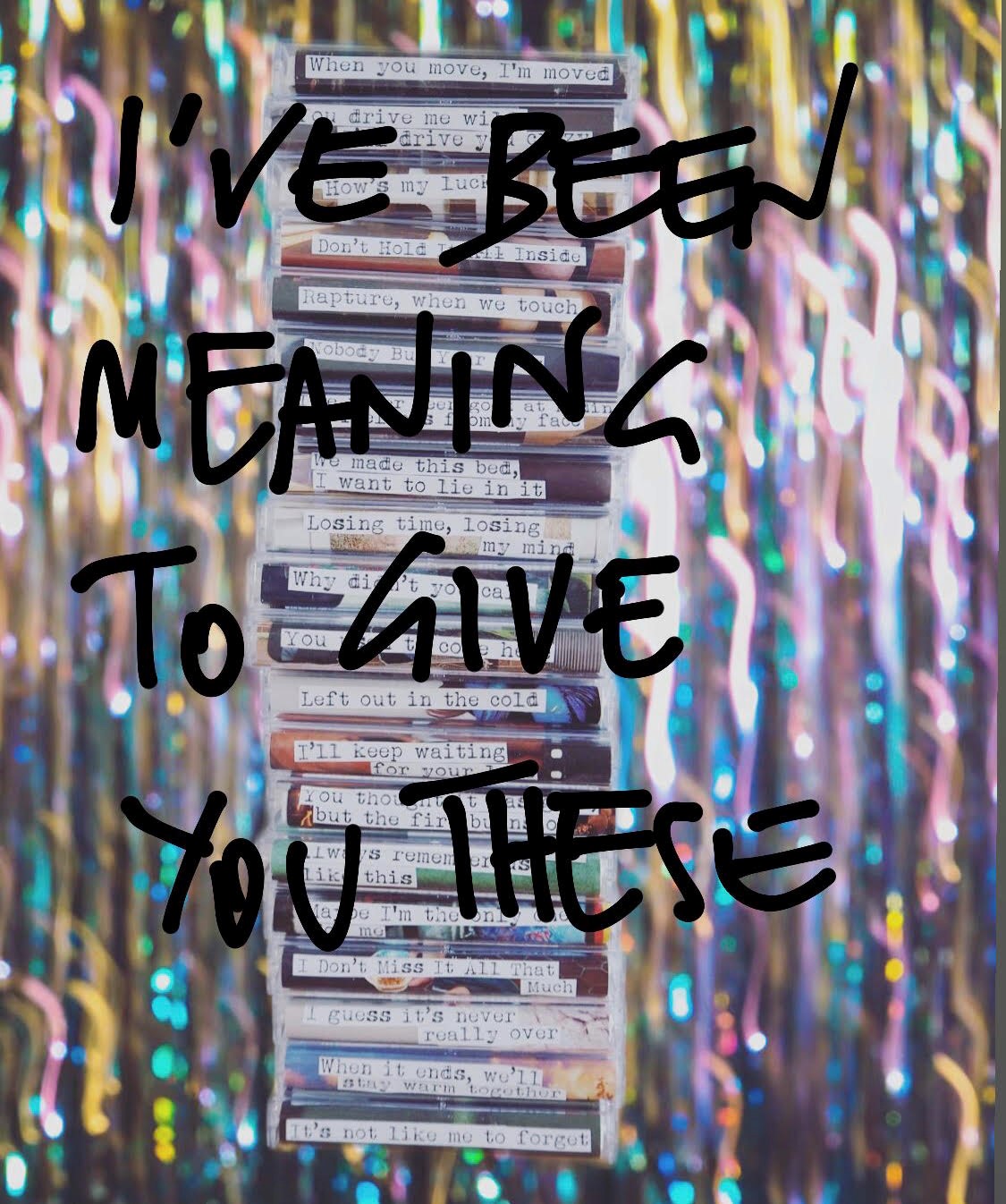 Beth Ferialdi I’ve Been Meaning To Give You These, 2020, dimensions variable, hand cut and digital collage, 1/1, printed by Fitzgerald Photo

Your work I’ve Been Meaning To Give You These is a nostalgic throwback to the mixtape and cassette players of the 80s and 90s. Why were you so drawn to exploring this theme? Did you have a cassette player when you were growing up?

In the past 2 years, I have found the pieces I enjoy making the most include an element of text and, similar to my previous FAC Print Award piece, I like to rearrange themed text to create new poetry and prose. I have a great love for music and tend to fall in love with lyrics and play songs on repeat for days, so being able to tell a story through the arrangement of track lists and lyrical cassette titles was very appealing. Growing up there were 4 kids in my household and my two brothers being the oldest, both received Walkman portable cassette players one year for Christmas. I would borrow these any chance I was given and then finally inherited one, once they had graduated to a Discman. The creating of mixtapes for me started when I would sit by my cassette player on a Sunday evening and record songs on a tape from the American Top 40 radio show. In high school I would burn tracks downloaded from Limewire to CDs curated for my friends. The idea for the piece originally started from a series of themed playlists I was compiling on Spotify. I wanted to create something more of a tangible collection and given my love of collage, was drawn to the era of magazine cut-outs and the original mixtape, CDs didn’t feel right for the piece.

The work takes on a highly personal note with the inclusion of some of your friends singing the tracks. Why did you decide to take this route?

Even without the inclusion of my friends singing on these tapes, the piece would have felt very personal to me. I am drawn to music because, unlike anything else, songs can appeal to millions of people but also feel incredibly personal and through these we can connect with others. I didn’t intend on creating this piece for a wide audience, it was amusing and something I enjoyed making, simply for the process. I thought about how I could make the piece a collectible that could sit on my shelf at home, which is why I wanted to do something special with what was recorded on the tapes. I recall a podcast episode where someone had spent a year recording his friends at social gatherings and even much more mundane times and the idea of this had always felt really beautiful and comforting to me. So for selfish reasons I wanted to capture my friends in this moment, to listen back in 5, 10, 20 years time to be reminded of them and perhaps laugh about it with them. Initially, I thought it would be near impossible to get enough friends interested in, or even regrettably agreeing to, singing for the project. I wanted the singing to be real and showcase the enjoyment and emotion it brings, so the instructions were to put your headphones on, press record and sing your heart out (and guess what.. there’s no backing track).

Let’s say hypothetically someone has just finished listening to the tapes in your work in the gallery. Ideally, how would you like them to respond or to feel?

Ideally, I would hope that people felt joy and amusement listening to an acapella version of a familiar song. I would hope they may even cringe or laugh, embodying some of the embarrassment that was felt by my friends before, during and after recording themselves. I would hope that they left the gallery with a smile on their face, being inspired by how each of these people had allowed themselves to be so vulnerable and courageous. And finally perhaps having a want to turn up the radio and see how it feels for themselves.

You will be co-presenting FAC’s first ever Karaoke Party at the Print Party on Wednesday 14 July. What can audiences expect on the night?

People can expect a night of celebration to mark the end of the Print Award with singing, dancing, artist talks and food and drink available. The karaoke set has been curated, by myself and the friend who first introduced me to collage, from songs that feature on the track lists across the twenty cassette tapes in my piece. Songs from the 60s, 70s, 80s, 90s and 00s will all feature, so there will be an opportunity for everyone to get on board, either taking the plunge with the microphone, singing along from the crowd or having a boogie in the courtyard. Bring mum and dad, bring the neighbour, bring the kids, there’s something for everyone!

Featuring Karaoke, artist talks, food, drinks and the chance to browse the exhibition before it closes on Sunday 18 July, the Print Party kicks off at 6pm on Wednesday 14 July. View more details and RSVP.