“It is time to see stained glass as art of the future, not only of the past. It does not belong only in the realm of the ecclesiastical, but in the clamorous space of daily life, philosophical preoccupations and the convergence of nature and the industrial.”

Residing in Perth on Whadjuk Nyoongar Boodjar, Hannah Gregory is an Australian leaded stained-glass artist who is currently in residence at Fremantle Arts Centre. After dedicating years to honing her craft working in glass studios across Australia on larger public works and lengthy restorations, Hannah is now solely focusing on her own practice, commissions and autonomous works.

Returning to her hometown of Perth after attending residencies in Austria and Wales, Hannah is experimenting with sandblasting, painting, leading, plating and kiln forming. Her goal during her residency is to make pieces that provoke thought as light provokes life using natural inclusions and inspiration from the Western Australian coastal landscape. 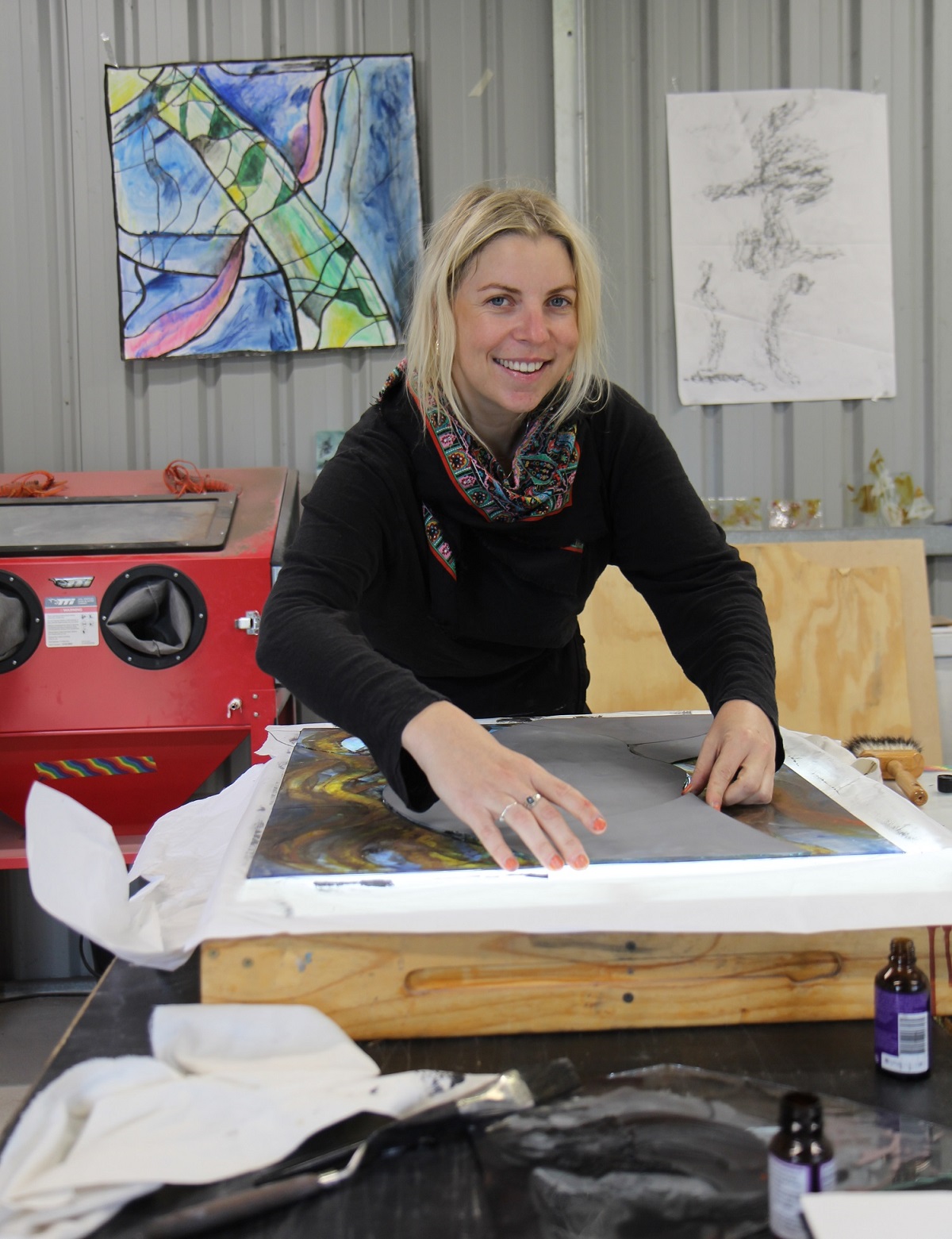 Hannah Gregory in her FAC Studio

You’ve been working as a glass artist for 6 years. What is it about working with this medium that appeals to you?
There’s a couple of reasons why I’m drawn to glass. I think there’s a real egoless-ness to it which is embedded in the history of glass art. For example, historically with stained glass in ecclesiastical churches, you weren’t making the windows for you, you were making them to serve a higher purpose. Even though I’m not religious, I like the idea that it’s not all about the artist per se; it’s about something bigger than you.

And I love that you are just facilitating the art a lot of the time because the light does all of it. I love it because the potential is limitless. It’s kind of been stereotyped with people thinking stained glass is only for churches or old-fashioned houses, but it’s so much more interesting than that.

Tell us about your practice. What kind of work are doing at the moment?
My practice is largely lead-based, so stained glass. I paint on glass which is quite specialised and at the time I started it was impossible to learn in Australia, so I had to go overseas. I also work with the sandblaster and enamels – all different sorts of things! All my pieces require kiln firing, my kiln is my best friend.

My practice is mostly commission-based but at the moment, on this residency, it’s more experimental and later in the year I’m going to the US for a fellowship which is more painting-based. It’s a mixture of large architectural commissions for commercial spaces or private homes, painting and more experimental work.

I also do little drops on Instagram of tarot cards and different things which are more ephemeral for people who don’t necessarily own their home or people who move around. I really like the idea of these smaller pieces and they are quite popular. I think stained glass is having a revival.

Tell me about the experimental work you’ve been doing while on this residency?
Like everyone in Australia I spend a lot of time on the coast. I’ve been experimenting with using seaweed which I’m finding quite interesting. So largely I’m trying to fuse these natural elements between glass and create patterns with the natural materials. I also love experimenting with plating, which is where you layer sections of glass. I’ve been going through a process of compressing seaweed so it dries and becomes like a pressed flower. I’ve been really enjoying that. There’s something that I find so interesting about seeing something so familiar to us in a foreign way like a piece of seaweed between glasses, it looks quite isolated. I not 100% sure where this work is going, but I guess that’s the point of the residency, to be able to explore.

You are part of a league of artists who are modernising the medium of stained-glass art. How have attitudes towards glass art shifted? Do you feel there is a greater appetite for the medium both commercially and in contemporary art?
I would say that there have been multiple movements in the past which perhaps have been accelerated by social media, but the one we’re seeing now I think is happening largely because people are starting to value handmade, bespoke products. People are becoming more disenfranchised with fast anything – whether that be fast fashion or fast furniture. It seems to me people are yearning for things that are unique and that relate to them. That has created a market for a lot more stained glass to be made and made in a different way. You’ll see a lot of décor-style stained-glass on Instagram, which is usually the copper foil method, but then you’ll see a lot of people that are approaching it in an architectural way that’s a bit different. I kind of do both. I think in the end, it does come down to the idea that everyone wants to invest in something that’s unique. People are starting to be a bit more thoughtful with where they put their money, and I think that means there’s more support for artists than ever before.