A recent Artist-In-Residence at Fremantle Arts Centre, Jacky Cheng is an artist and an art educator based in Broome, Western Australia. A finalist in the 2022 Blake Prize and the John Stringer Prize, her work is an exploration of identity through cultural activities and memories of home; country and relationships. We recently caught up with Jacky Cheng to find out more about her practice and the body of work that caught the attention of one of Australia’s longest-standing and most prestigious prizes. 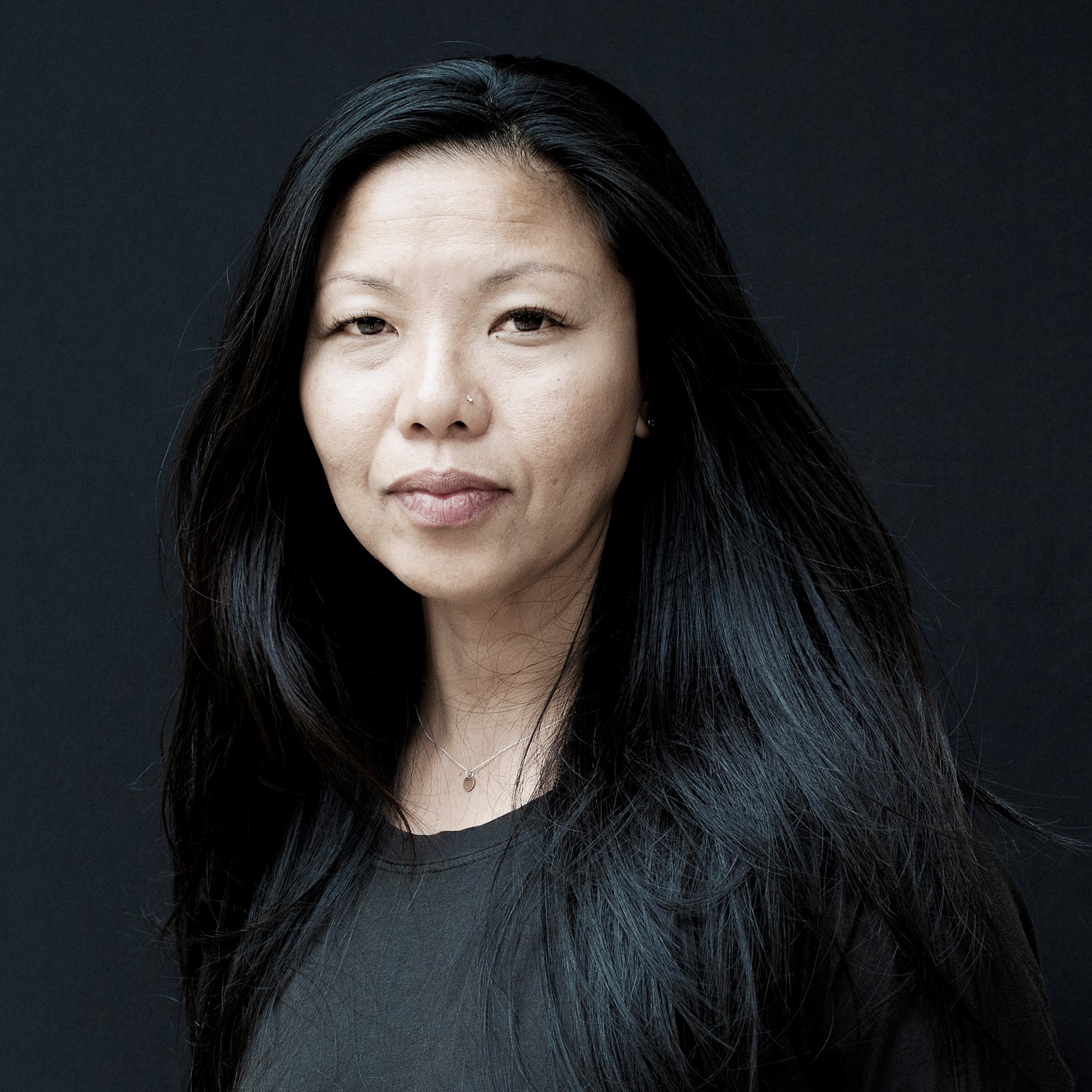 Jacky, you’ve just finished up a residency at FAC. What have you been working on?

I’ve been on a methodology journey. I am currently fixated on making paper threads (kami-ito) from the kozo papers (kigami) I made during a residency in Awagami Factory in Japan back in 2019. Both the papermaking and paper thread making is extremely laborious but at the same time incredibly powerful to have this knowledge. My approach to the residency thus far is about researching, exploring and testing the methodology with the papers I made and various other papers either found or commercially manufactured and at the same time, interrogating my temperament. Due to its lengthy process, it requires the patience of a saint, and there is that constant conversation in my head about the future impact and sad loss of not having these techniques or skill shown or talked about in our contemporary society.  It is an impending fear that our future generation may only continue to read this in the past tense rather than a celebrated technique in our contemporary art practice.  So, I’ve dedicated my time at FAC to the a strict diet of discipline and a ritual of consistency and rigour – turning up everyday – cut, roll, spin . I am such a studio creature. Being in a dedicated space with uninterrupted time feeds clarity. I look forward to work everyday.

This is not your first time as a resident at FAC. What keeps you coming back?

One of the best aspect of residencies are the non-prescriptive expectations from practitioners. FAC is unique and incredibly diverse in the workforce – everyone is either a practicing artist or works in a creative industry in one way or another. Everyone is super friendly, incredibly helpful and supportive, skillful, knowledgeable, communicative and champions each other. There are always people on the ground ready to assist with your queries. It is the people that makes the place great. I recently read somewhere where FAC is termed as the creative campus. I think it is absolutely apropos to Walyalup and to the surrounding artistic community. 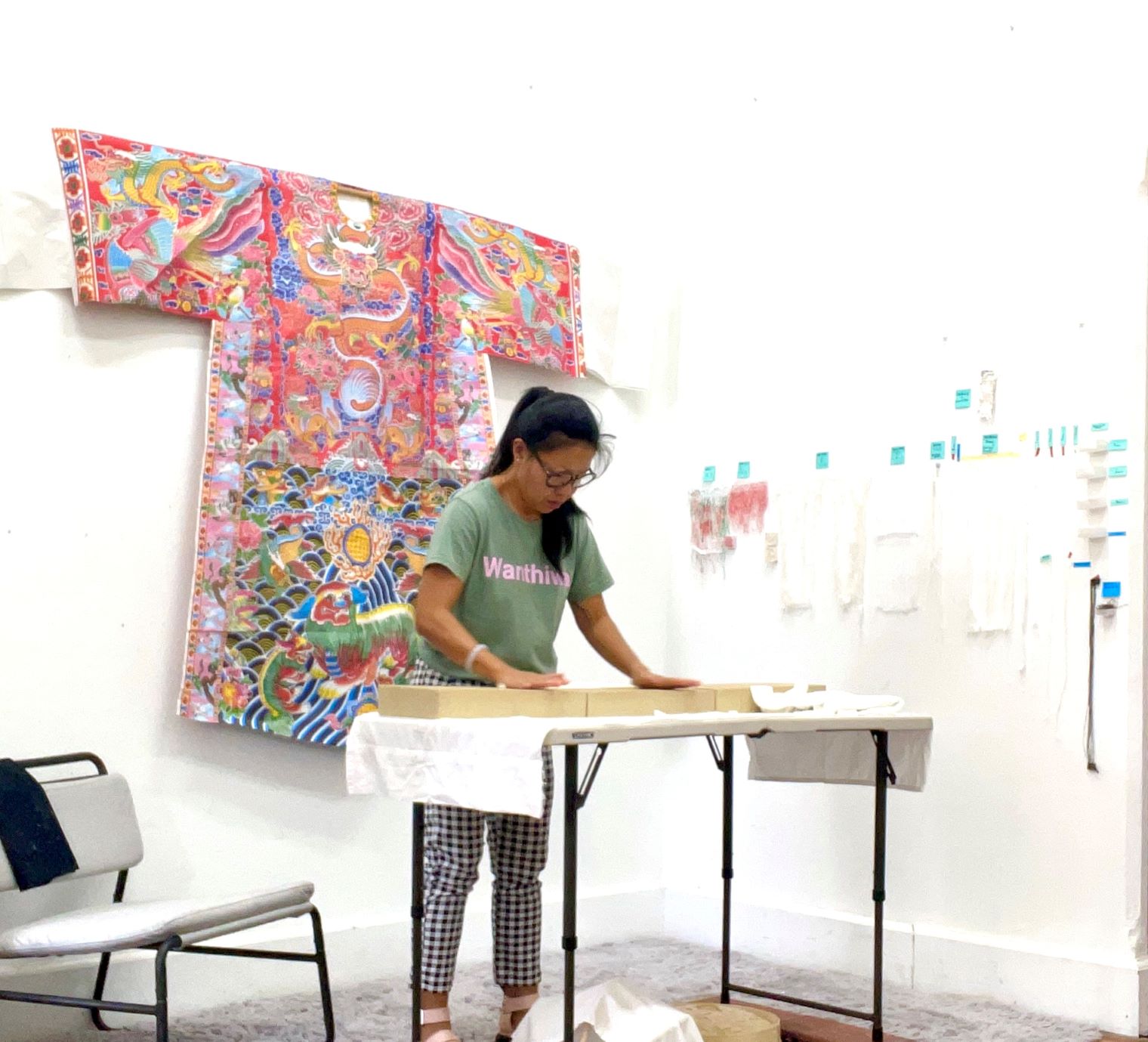 Jacky Cheng working in her studio at FAC

I understand wanted to be an architect in Malaysia until a life-changing holiday in the Kimberley led you to the arts. Can you tell us a bit about that?

I grew up in the city (M’sia)  and then moved to another city (Sydney) for my tertiary education. I was sold the impression to be successful is to be a professional in the city. The ease of navigating myself in a cityscape is convenient and familiar. My move to the Kimberley stemmed from my first encounter with a Broome local in a local cafe where she told me about her background and multiracial identity. It dawned on me that I knew nothing about Australia and First Nations people. My first trip to a remote indigenous community was a memorable one. I was sent out there to teach as a TAFE arts lecturer. Long story short, it took me a while to realise that story-telling is a way of making sense of someone or where they come from. They loved listening to my experiences as a Malaysian Chinese immigrant in the Kimberley and I love listening and learning about their ancestral connections to land, sea and sky. There is a plethora of similarities in our exchange which includes the non-verbal deliveries, such as the nuances of sitting together quietly. There is that beautiful calm in story-telling until one of us starts cackling and infects the rest of the group. It felt like home to me.

Your work often explores the duality of being a Malaysian expatriate in Australia, while also being ensconced in the First Nations culture and spirituality of Broome, where you live. What is it about this you find so interesting?

In Malaysia (and possibly in the neighbouring country, Singapore), the term Banana Girl is very common and often associated with people of Chinese descendent who aren’t able to read, write or speak Chinese. My mum refers me a Banana Girl. When I was younger, following the Western culture was pretty cool and current because that was the only ‘outside’ influence we were exposed to via television.  I attended public school where Bahasa Malaysia was the predominant written and spoken language in our school work except English lessons. Outside of school and or at home, I would speak in a mix of Cantonese, Mandarin, English or Bahasa and sometimes both my grandmother’s dialects Hainanese and Teochew. But I am neither fluent nor excellent in any of my ancestral native languages. My first public shaming experience was when I was travelling in Hong Kong, proudly showing off my spoken Cantonese to my travel buddies as if I’ve got their back only to realise that I was shamed by a local resident of my ‘defect’ when I fail to read his writing when I’ve just spoken to him in Chinese. It is a literal sense of feeling in-between and being Chinese but not Chinese enough. But the more visceral way of experiencing this is the fact I felt the invalidity of my sense of belonging. 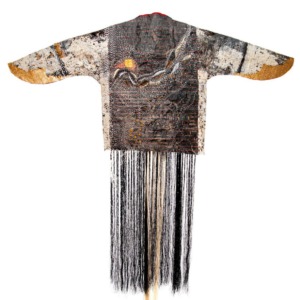 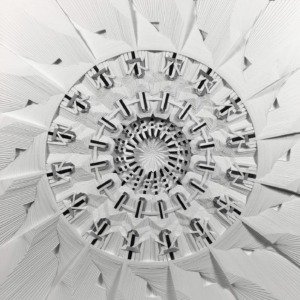 When I arrived in Broome, I experienced the similar ‘multiplicity’ from the community. When I finally found some common stories or similarities of my native home identity in Broome, WA, I realised I never really left ‘home’ but more so embrace a slightly different narrative of ‘belonging’. My practice touched on personal experiences and at the same time taking the liberty to investigate the notion of ‘place and identity’ or what Broome or Kimberley means to me. Living and practicing in Broome is special. The motivation is different – it is respectful and sensitive story telling. Culture comes from place. Everyone has such a rich and diverse story with strong family connections. It continues to baffle me by how much more I do not know even after 16 years of living in the Kimberley. I channel that interdependence in my art practice. It embodies my practice with intent and with purpose.

Congratulations on being named a finalist in both the Blake Prize and the John Stringer Prize. How does it feel to be recognised in these prestigious awards?

One of my good friends told me about the Blake Prize after a brief conversation about the piece that I’ve been working on. I looked it up and saw the previous finalists names and thought to myself that I am no where at the level of these established artists with such rigour in their practice. Nevertheless, I thought I should give it a go. I’ve had plenty of rejection emails and unsuccessful selections in the past. It definitely helps define the work I do. I remember telling my partner and another friend the morning I received the congratulatory finalists news for the 67th Blake Prize. They congratulated me (but of course they had no idea what The Blake Prize is about…). I found myself skipping and smiling from ear to ear and crying at the same time. I am over the moon to be a finalist. That’s a win to me. As a regional artist, sometimes the distance hinders you from many great networking opportunities but of course with the accessibility of various online platform means that you are a tad closer… just a tad closer.

My Blake Prize submission is titled Yue Lao – The god of Matchmaking and Marriage, and it explores my late uncle’s marriage which was arranged by my Grandma, Ah Ma. Yue Lao is an old learned Chinese mythological cupid. He is believed to be immortal, and his focus is finding the perfect marriage matches for people. The work is made from sheets of recycled Chinese calendar papers that I religiously tear every day. In this in-between homeland – Australia, I struggle to clarify tales and myths with my elders. But there is a desire to understand why some practices still exist today but just in a different structure. 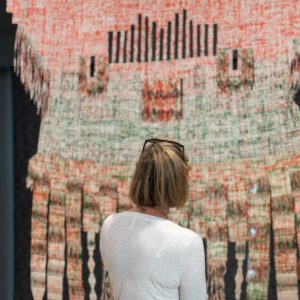 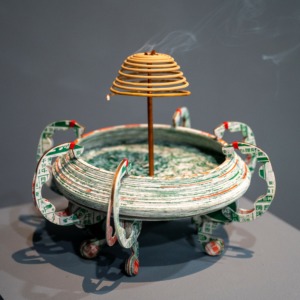 Jacky Cheng, Yue Lao – The god of Matchmaking and Marriage, 2022

The John Stringer Prize finalist announcement is another skip, ear to ear smile and cry moment too. I am in the process of making this piece and the work will be exhibited at the prestigious contemporary John Curtin Gallery in October this year. I am super chuffed with this opportunity and to be alongside my other finalist peers.

I understand your interest in paper and ‘slow art’ stems back to your relationship with your Grandmother. What kind of rituals did you practice together and how did these inform your practice?

The act of doing and making was already part of my upbringing. Folding thousands of joss papers in one sitting was not recognised as an artform at home but only as mandatory duty for girls/women.  I most certainly was not allowed to pursue art as a career. So, I found the next best and most glamorous job in the dictionary and thought being an architect will somehow bring me closer to art. But of course, my intention was tested and the thought of me, a female, not carrying the family name after marriage is not worth the family’s investment. Long story short, I broke past that with my brother’s guidance in convincing my family that I am worth the investment in gaining a respectable qualification to aid my future endeavors. Then I rebelled. I jumped ship.  I pondered this thought about my role as a female, home maker and how my name is less important than my brothers for a long time.

The thought process shifted when I was able to articulate the rituals we performed at home to my brother who has absolutely no clue. I found myself revisiting the process from the time I spent with my grandmother. There were ways of doing things that makes so much more sense now to me as an adult than when I was a child. The rituals, the making, the ephemeral beautiful folded paper works we prepare only to be burned away in the fire as an offering to the deities or ancestors. Bringing all these evocative sentiments into the studio, into my practice, enriched my role as a practitioner, a woman, homemaker, daughter, sister and more importantly a carrier of the ritualistic significance in my practice. My grandmother performed her role her entire life with very strict guidelines in her society. I will continue to perform my role in telling the stories and be the in-between of what ‘was’ and what ‘will I do’ to the next generation but maintaining the integrity of culture and its significance in the Taoist tradition. Paper is like my second skin. I’ve worked with paper since I was a child and there is so much more to learn about it in this lifetime. Perhaps that’s the narrative of ’slow’ I am referring to.

Jacky Cheng’s work is on display at the The 67th Blake Prize Exhibition – Casula Powerhouse Arts Centre till 22 May.