Continuing the IOTA21 opening weekend festivities, join us in the Main Gallery 11am Sunday 19 September for a relaxed conversation with Kimberley Bard artists and brothers – Darrell Sibosado and Garry Sibosado, along with their nephew DJ. All three talented men are exhibiting artists in Curiosity and Rituals of the Everyday.

This artist talk will reveal fascinating insights into the trio’s practices and the stories behind their exhibited artworks.

Travelling from Lombadina, an Aboriginal community in northern Western Australia on the Dampier Peninsula, the Sibosado family are Bard people.

Darrell Sibosado and DJ will talk about their new large-scale contemporary installation Niman Aarl. Created on Bard land, in a multi-generational partnership of uncle and nephew, the two men carved hundreds of fish, with the help of their families, to make up this stunning installation. This work asks the viewer to consider their effect on our planet and the ecosystems that sustain it.

In his practice, Darrell presents both traditional and derivative contemporary designs. The inspiration for Darrell’s work is taken from the traditional pearl shell carving  and mother of pearl etching of the Bard people. DJ, Darrell’s nephew, is a promising young artist in his own right with a desire to continue these traditional Bard practices. He now works closely with both Darrell and Garry Sibosado to learn the traditional skills and the accompanying stories and knowledge.

Niman Aarl references the disturbance you see on the water’s surface and the flurry of activity beneath.  Symbolising a number of pertinent messages about the times we are living in, the work addresses notions of environmental concern, the beauty and intrigue of the ocean and most importantly represents a contemporary expression of the artists’ age old culture and reverence to the Sea Country. 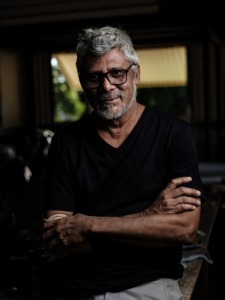 Darrell Sibosado is a Bard man from Lombadina situated on the Dampier Peninsula of the Kimberley coast, Western Australia.

Through his printmaking and installations Darrell reflects on traditional Bard culture and is intent on reiterating that Aboriginal culture is living, adaptive and undeniably commands a presence in the contemporary space. Darrell’s largescale designs are derivative of both the physical form and the stories within the riji (etched mother of pearl) designs and motifs handed down to himself and his brothers.

Darrell believes that the arts are an inseparable part of Aboriginal culture and it is through the arts that Darrell maintains his spirituality and links to his traditional Aboriginal heritage. 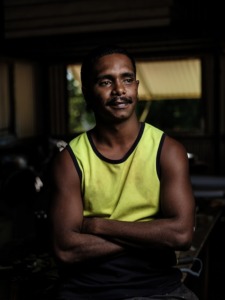 DJ is the nephew of Darrell Sibosado and a Bard man from Lombadina.

DJ has a desire to continue the traditional Bard practice of pearl shell carving. This did not go unnoticed by uncles Darrell and Garry Sibosado, and DJ now works closely with both of them. Selection in IOTA21 presented a perfect opportunity to hand down skills and important cultural heritage from uncle to nephew. This mentorship has been immensely rewarding for DJ’s professional development in the arts.

Garry Sibosado is a Bard artist and jeweller. He started carving and engraving pearl shell under the guidance of his tribal Elders who were custodians and creators of significant traditional artefacts such as the Riji symbols – the distinctive guan carvings used for trade, ceremony and adornment.

In 2005, Garry took part in comprehensive training in Jewellery Design and Craftsmanship at Atelier Pindan and Linney’s Pearls in Broome; and later completed a Certificate of Jewellery Manufacture in Sydney. Since then he has continued a strong practice of making jewellery at the community workshop in Lombadina, and creating large scale works for exhibition, mainly using locally sourced materials.