At the Ridges of Our Hands – Project Team

Linda Iriza is a Rwandan people weaver, creative producer and artist currently living on Nyoongar Boodjar. Her work includes community engagement and arts projects, and she is co-founder of Soul Alphabet, an organisation committed to amplifying the voices of People of Colour and celebrating the cultures of the African diaspora here in Western Australia. 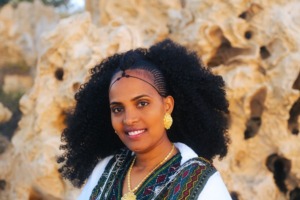 Elsa Weldemical (Soul Alphabet), Hair braider for the project At the ridges of our hands. Photography by Jim Hall

Elsa Weldemical is a mother, committed to celebrating and continuing her Tigrayan culture in Boorloo. She braids the hair of women in her community for culturally significant ceremonies and celebrations. Elsa’s passion is for her children. 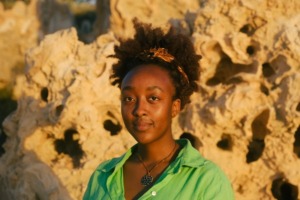 Shanice Mwathi (Soul Alphabet), Hair braider for the project At the ridges of our hands. Photography by Jim Hall

Shanice Mwathi is a photographer and videographer who enjoys working on branding projects and photo portriatiure. Shanice’s work often approaches abstract themes and is informed by her African-Australian experience and she loves that I can represent this community in her work.

Patient Beyan has over 10 years of experience in her hair braiding practice, a craft that has always been performed in her Liberian and wider-African community for centuries. The hair experience is important to her as it is a celebration of self-love, trust, connection, and an embodiment of ancestral knowledge. 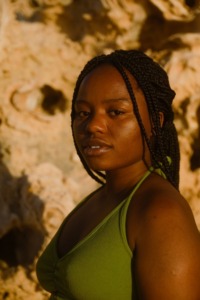 Chiluba Young (Soul Alphabet), Hair braider for the project At the ridges of our hands. Photography by Jim Hall

Chiluba Young is a Boorloo-based photographer who started photography with the intent of building friendships with African women in Australia who shared her life experiences. Representing women through photography has become a passion for her. Chiluba’s work seeks to address the lack of representation of Black women, particularly within the arts community in Western Australia.

A selection of Chiluba Young and Shanice Mwathi‘s Undertow works are available to purchase. Visit our sales page for details.

In this sense, braiding is not just an aesthetic form with a history, it is a literature of the skull; an art with its own canon; it heralds unbroken lines of intimate memory passed from generation to generation.

Oceans have long been places of journey, a theatre of people moving across time and place. While oceans feature in many of our narratives, often they are spaces of longing, the space between us and our families, our homelands, or our histories.

When we travel, when we choose a new place in the world to live, we take so much of ourselves, of our ancestors and the worlds we have inhabited with us, we find people in our new communities who are able to relate to our own experiences and find comfort in being understood without being asked for an explanation.

The photographic project At the Ridges of Our Hands explores the practices that travel with the movement of people, by showcasing braiding traditions of African communities living in Boorloo & Walyalup, away from the African continent. These powerful photographic works depict both the practice and outcome of braiding, but more importantly, they reveal intimate spaces of connection, belonging and community. Through their lenses, photographers Shanice Keeru Mwathi and Chiluba Young take us on a journey into these spaces, they reveal to us not just a process of beautification, but a lineage of knowledge and a network of memory embodied within the hands and minds of braiders across the globe, all which trace back to the African continent, to homelands that people will always belong to.

The following text was commissioned for Undertow, as a response to the narratives, themes, and ideas in Soul Alphabet’s exhibited works. Sisonke Msimang is a Boorloo-based, South African writer, activist and political analyst whose works explore race gender and politics.

I love us when we are ordinary and unspectacular

I am interested in the contemporary, in the modern; in the way Black people live in now-time.

I am interested in present-day renderings of African life and Black diasporic life because too often, when Black people show up in galleries, on white walls in cool buildings that have long colonial memories, we are representatives of some dark past, rendered as evidence of the sadness (and occasionally joy) that emanate from a dark continent.

We appear veiled in sadness; draped in big feelings – good or bad.  We are seldom captured in in-between moments.  We are never twenty-first century people doing twenty-first century things.   We are chained to our pasts.  It is easy to forget when you look at us in exhibitions, that we invented cool.

I could spend time – as many have – excavating the many African histories Europeans tried to kill during the Enlightenment when they believed they discovered individual rights and science and when they invented race.  In creating the myth of their intellectual superiority, they dreamed up a new racial taxonomy in which white was on top and black was on the bottom; in which white was the opposite of black; in which slavery was justified.  It posited that dark-skinned people were pre-modern which meant we were enslave-able and had to be saved from our own wretchedness.

So, I see us as future people and am not interested in being detained by dredging up “one more thing,” which keeps me from doing my work.  I would rather do my work, which is to imagine into the certainty of the future because nothing can be more important than to secure life on this planet in the days that come after tomorrow.

Black art has always been about making a way where there appears to be none and braiding is the art of making tracks, of moving away from one destination and towards another. Braids are lines on a scalp that become a pattern, that make their wearer a beauty to behold.  African art has always been deeply invested in the aesthetics of balance and braids are nothing if not a work of balance.  Braids are a metaphor then; a path and a creative impulse.  And lest you accuse me of forgetting where we come from, yes, braiding is also about memory.  The neat lines and clean rows that flow from a braider’s hand are a measure of how she was taught; a reflection of the woman who taught the braider. Braiding does not emerge as a skill miraculously out of thin air.

In this sense, braiding is not just an aesthetic form with a history, it is a literature of the skull; an art with its own canon; it heralds unbroken lines of intimate memory passed from generation to generation.

In Yoruba ontology, the human personality consists of three elements: ara (body), emi (soul) and ori (inner head).2 One’s success or failure in life depends on the head.  Adorning the head then, is a way of honouring the ori.

As a child I have many memories of sitting on the floor with my head leaning back into my mother’s lap.  I always wriggled because the hot comb would singe my ears.  My mother would say ‘my girl you have to suffer for beauty.’  The proto-feminist in me hated this phrase.  I would squirm more, in anticipated fear, the smell of burning hair mocking me.  She would tighten her grip on my torso with her legs and I would be stilled by force.  But then the hard part would be over and once my hair my hair was straight, the kinks burned out of it by the hot comb, I would relax into the plaiting. I loved that part of the bi-weekly ritual.  My mother had soft hands and my head was never sore afterwards. I was always pleased afterwards.  I would look in the hand mirror she put in front of my face and my eyes would be pulled taut and high and everyone would say how beautiful I was.  My uncle would call me Cleopatra and my cousin would say I looked like Queen Nandi.

When I was older, in university, missing my mother and her soft hands, I sat in an art class and learned about the “aesthetics of cool.”  My lecturer refenced Robert Farris Thompson, the grandfather of cool and suddenly I understood something I had only intuited.

Farris Thompson tells us that “coolness has to do with transcendental balance.  Manifest within this philosophy of the cool is the belief that the purer, the cooler, a person becomes the more ancestral he becomes. In other words, mastery of self enables a person to transcend time and elude preoccupation.”3 In other words, to be cool is an ethic, a stylised way of exhibiting beauty and exhibit calmness.  To be cool is to “be nonchalant in times of stress.”4 This philosophy predates the arrival of Europeans, but it has assisted Black people everywhere in surviving the colonial encounter with remarkable creativity.

My mother’s words were not simply the feminist betrayal I had imagined them to be.  She was instructing me in an ethic of beauty that went beyond the superficial. She wasn’t (just) glorifying pain; she was also teaching me how to cool down; how to endure; how to master myself in service of respectability (she was after all, middle-class) but more importantly, in service of what Helena Andrews has called, Black women’s “coolness coat of arms.” She was helping me to develop a mask, “our impenetrable shield.”5

She was also instructing me in the reality that African aesthetics are never just about the cover.  What is on the outside matters because of the spirit it protects. When my relatives called me Nandi and Cleopatra, they were not simply saying I was pretty, they were seeing me; they were recognising my ori.

The photographs exhibited in Undertow telegraph our ori.  They remind me that I love us when we are ordinary and unspectacular.  They tell me we make beautiful things everyday – out of the ridges of our hands.  In these pictures African women are not detained by the camera nor distracted by its gaze. The women in these photographs are searching the skies, on the lookout for unidentified objects on the horizon.  In these pictures our gazes are fixed firmly on the future.

Gurl, in these photos, we cool.

1 Part of a speech Morrison made at Portland State University in 1975 entitled, A Humanist View.  You can listen to it here: https://soundcloud.com/portland-state-library/portland-state-black-studies-1