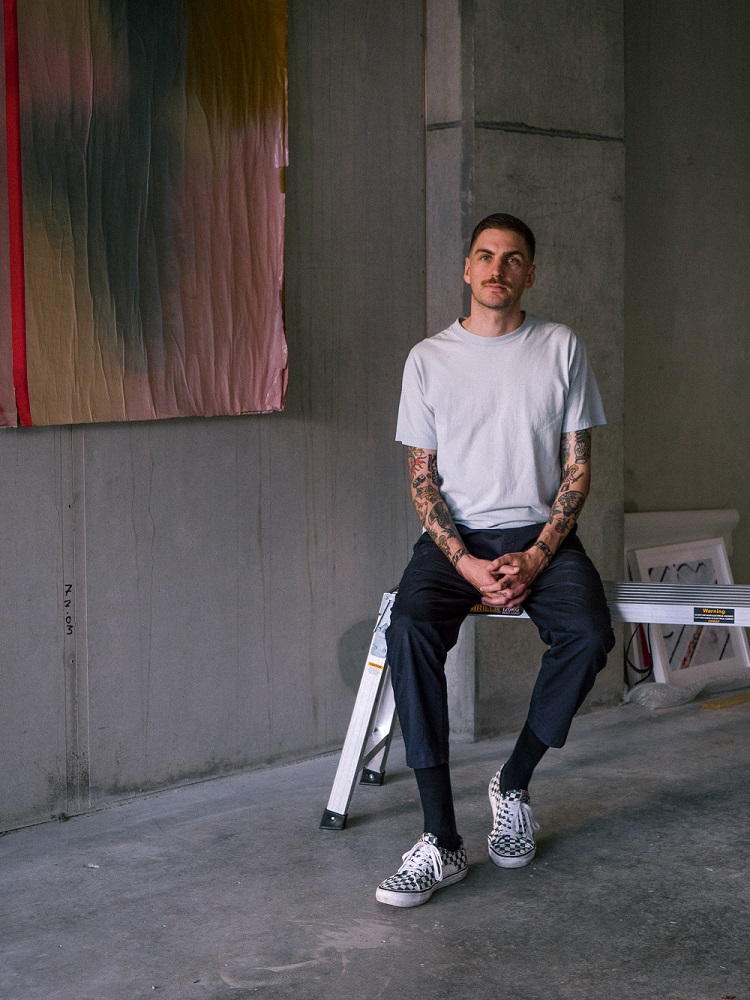 Sam Bloor is a photographer and visual artist from Perth, Western Australia. His practice investigates points of contention within the designation of urban space along
with perceived notions of value and labour.

Bloor has exhibited in a number of group and solo shows both nationally and internationally including, Totem InTribute (2016) in Edinburgh, UK, the Fremantle Biennale (2019) and Rotterdam Photo Festival (2019), NL. Bloor has won multiple awards, including the Fremantle Arts Centre Print Award, and is represented in both private and public collections including the Art Gallery of WA.

A selection of Sam’s Undertow works are available to purchase. Visit our sales page for details.

‘Borders are the scars of history’, Josep Borrell

Sam Bloor’s newly commissioned works presented within the galleries at Fremantle Arts Centre and off-site on the carriages of the Tourist Wheel at Fremantle Esplanade Park examine our coastline and the oceans that surround as site of asylum for those fleeing persecution, but also as site of nationalism and systemic racism.

Bloor’s works in Undertow, like many in his oeuvre, employ highly-considered text provocations that interrogate Australia’s hard-line stance on border protection – which in summary, is a ferocious defence mounted against any enemy of the nation-state to protect the border, to stop the boats at any cost, monetary, or human. Ironically, these policies are in place to protect a British settler colony established on unceded land, stolen from its rightful custodians less than 250 years ago in a series of human rights violations that continue to this day, both onshore and off.

Within the galleries, in a work of the same name, Bloor offers the provocation ‘that sinking feeling’ at a billboard-like scale, almost five metre in height. A single black line which begins at the opposite end of the room travelling from ground to ceiling on the flanking walls, cutting the space diagonally into equal halves, black below and white above. In doing so Bloor renders a horizon line of sorts, contorting the space in a way that leaves us feeling somewhat submerged, and off-kilter.

While simple, the provocation, ‘that sinking feeling’ is layered and complex, especially so when considered from multiple viewpoints, vantagepoints and worldviews. Voyages across oceans are perilous and often result in tragedy and loss of life. The image of a sinking boat, a familiar sight in media journalism, is easily conjured within our minds. That sinking feeling however is one that we have all experienced. It is that moment in time when we are overcome with dread upon realisation of something terrible having occurred. Our heart races, our breath constricts and a pit forms in our stomach. For Bloor, this is a descriptor of his own visceral response to the ways in which human life is disregarded in the protection of a border, an imaginary line on a map that divides people into two categories, those who belong and those who do not, those whose lives have value, and those who are seen only as a threat to be managed.

For Bloor, the provocations within these works required complexity and the capacity to be interpreted and experienced in differing ways, ways which resonate of nuanced human experience but also of opposing views and of political hypocrisy. Platitudes of nationalism like ‘lucky country’ embellish a mirror, which faces off against another featuring the words ‘illegal bodies’. As we stare into these works, our own faces reflected back to us, we are stuck in the tension of opposing politic and ideology, reflections of simultaneous indifference and empathy and the resulting malaise.  We find ourselves trapped and reflected within in an abstracted portrait of contemporary Australia.

These provocations, many of which are drawn from news media articles, interviews and government collateral continue beyond the galleries of the arts centre at Fremantle Esplanade Park, even closer to the Indian Ocean, where they are emblazoned on the carriages of the Ferris wheel that reaches almost fifty metres into the sky. Offered in the same monochromatic treatment seen within the galleries upon bright red carriages with tinted grey windows that travel high, these provocations are transformed into warning signs, particularly from the ocean, warning that the final approach to safety and any imaginings of new beginnings will likely result in an unjust and inhumane betrayal. The arrival lounge for those who have risked their lives to travel to Australia by boat, fleeing persecution and violence, has no welcome signs, no targeted advertising. Instead, many of these arrivals are processed and given onward tickets to faraway prisons on islands including Nauru or Christmas Island.

Mindful of the position from which he critiques, Bloor has spent time speaking with those who have sought asylum here in Australia, seeking to understand the nuance of personal opinions and reflections on Australian policies under which people have been administered. In undertaking this engagement and in having honest and sincere conversations, Bloor notes that for some, gratitude to be living in Australia was their primary reflection. For Bloor, this gratitude mirrors his own sentiment on having been born in what we now call Australia, to have access to clean water, shelter, universal healthcare, within a democracy. Bloor shifts between this gratitude and absolute outrage, between hope and despair, as he encounters and creatively critiques the hypocrisy of border policies and their resultant treatment of people in contemporary Australia.

LUCKY COUNTRY – ILLEGAL BODIES – WAVE OF TERROR – ONE STRIKE – YOU’RE OUT – TIPPING POINT – MELTING POT – SUN-SHINE – GRAVE-YARD all rise and fall in the sky above, rolling repeatedly, like waves breaking upon the shore. While the work can be appreciated from the ground, audiences can also purchase a Ferris wheel ticket for an experience transformed by altitude. Stepping into the carriage, a slight wobble underfoot, doors close and off you go up towards the sky. Your body and gaze are faced westwards, the Indian Ocean before you. As you ascend, the vastness of this ocean space is revealed, as too is your own physicality and vulnerability, but more importantly there is a moment of understanding, of plight and peril, which comes from an alternate vantage point, from seeing things through a lens less familiar.

In the here and now our causes, plights, opinions, and concerns are so easily shared, and reshared. Yet somehow there always seems to be a cause more urgent, more time sensitive, needing more attention than others. We hop off one cause to jump on another, like a ride at the show, like a Ferris wheel perhaps. Our steadfast allyship and our most sincere and heartfelt concern can seem somewhat fleeting, short-lived, insincere, or performative. While it is easy and commonplace to critique a generation of keyboard warriors, at the heart of the matter, is it not true that there is just so much for us to be deeply troubled by, so much to fight for and so many struggles to bring light to, most of which have historically been rendered invisible by oppressive mechanisms of power and control? 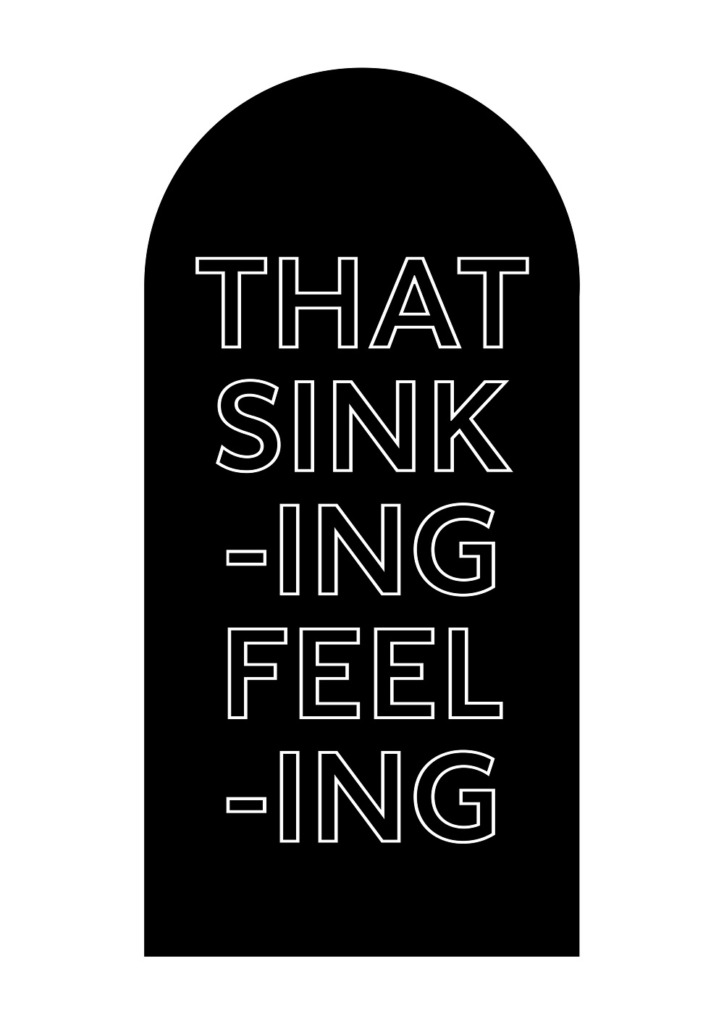 The following text was commissioned for Undertow, as a response to the narratives, themes and ideas in Sam Bloor’s recent works.

If we repeat an affirmation together, surely we are bound to increase the chances of manifestation. If I tell you that we’re equal and you echo it back, then that’s probably what we are. Especially if we make eye contact.

A yellow boat, girt by the thick custard curve of a dripping arrow, glugs across the Operation Sovereign Borders website. The icon might signify a circular voyage but it could as easily be the brandmark for a marine recycling program. The vessel, a silhouette of a long jutting bough with a square cabin positioned back near the stern, is a twin to the famed brushed metal trophy beached atop Scott Morrison’s desk.

‘I Stopped These’ says the boat in black title case.

You couldn’t claim that the proclamation had been applied with care – with no true anchor point for alignment, a curvy boat presents quite the challenge for typesetting. Instead, the text bobs somewhere in the middle, slightly askew. I imagine someone at the shop had to make a captain’s call. They may have been hampered by a limited selection of vinyl typefaces in a narrow range of sizes. Sans-serif was a sensible choice, equal parts modern and measured. A serif would be antiquated in contrast to the reflective alloy.

The most recent Federal Budget allocated over $37 million for the promotion of ‘Australian values, identity and social cohesion.’ These values include respect for the freedom and dignity of the individual; English being a unifying element of Australian society; and a ‘fair go’ that embraces the ideals of compassion for those in need and equality of opportunity for all. “We are in this together” is what we say. And we probably are.

I wonder how often the boat gets dusted. It seems like one of those trinkets that you would pick up every so often, like a signed cricket ball or a favourite bulldog clip. I imagine that a man would like to feel that kind of solid weight in their hands or could enjoy gliding the base across the smooth sea of a glass tabletop every now and again. Would you feel embarrassed if someone came in and caught you cradling the boat?

A comprehensive suite of Printed advertising material created for campaigns designed to dissuade people smuggling is available online thanks to a Freedom of Information request. The collateral serves as a survey of rhetoric, a capsule collection of the things we might shout across the sea. There are combative posters amongst the output with choppy desaturated seas, indelicate comics and many pamphlets with many folds for many languages, each boasting of impenetrable borders.

“NO WAY. YOU WILL NEVER SET FOOT IN AUSTRALIA” says a branded key tag, perhaps for the zip of a suitcase or to identify keys to a shared toilet. I wonder if an inhouse designer handled the load of the creative work or if an agency won a tender. It must feel odd to drag a map of Australia under a red sash in the style of a No glass in the pool sign. It must feel strange to register domains like australia.gov.au/zerochance or /novisa. It must.

Our rigid stance on the shore, and the slew of cautionary collateral we produce, reminds them that a deep ocean stretches between us. But what is it that we are actually saying? Can we be both compassionate and hostile simultaneously? Can we speak confidently about freedom and dignity while continuing with mandatory detention, often for years? Can we continue to talk about fairness and equality? We probably will.