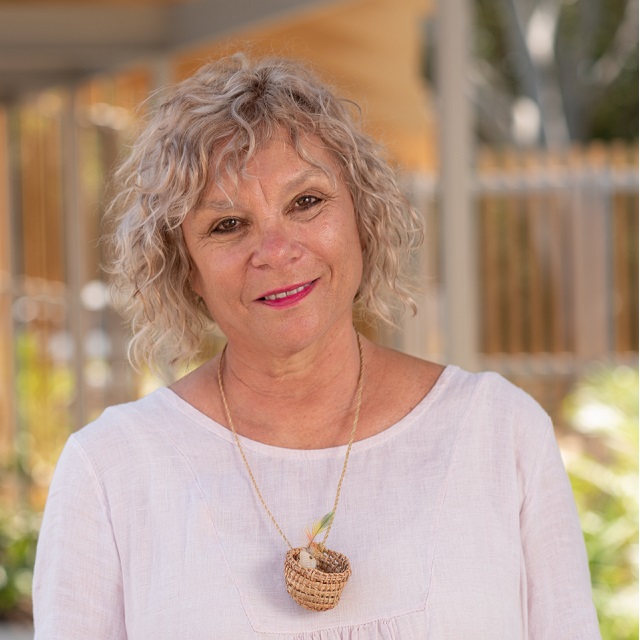 Sonja Carmichael is a Quandamooka woman from Mulgumpin / Moreton Island and Minjerribah / North Stradbroke Island, Queensland. She works specifically in the medium of fibre basketry and woven sculptures, informed by her family’s cultural connections to Quandamooka Country, exploring a range of techniques and materials, including ‘ghostnets’ and fishing lines – that directly respond to concerns about the preservation of the natural environment. Her work is held in collections such as the Queensland Art Gallery, Museum of Brisbane, National Gallery of Victoria, National Museum of Australia, and the Art Gallery of South Australia.

Quandamooka woman Elisa Jane Carmichael is a multidisciplinary artist who honours her salt-water heritage by incorporating materials collected from Country, embracing traditional techniques, and expressing contemporary adaptations through painting, weaving, and textiles. She comes from a family of artists and curators, and works closely with her female kin to revive, nurture, and preserve cultural knowledge and practice. Elisa is a descendant of the Ngugi people, one of three clans who are the traditional custodians of Quandamooka Country, comprising the waters and lands of Moreton Bay.

Both Sonja and Elisa Jane Carmichael are represented by Onespace, Meanjin | Brisbane, Queensland

A selection of Sonia and Elisa-Jane’s Undertow works are available to purchase. Visit our sales page for details.

The ambitious installation work of mother and daughter team, Sonja and Elisa Jane Carmichael, Ngugi artists from Minjerribah (North Stradbroke Island, Queensland) and Mulgumpin (Moreton Island, Queensland) sits at the heart of Undertow, transforming FAC’s main gallery into an underwater chasm, enveloping and submerging visitors within a vessel of ancestral knowledge as if held in the ocean’s watery embrace.

Presenting their most ambitious installation work to date, comprised of six expansive cyanotype works on cotton and a selection of forms woven in the enduring traditions of Quandamooka women, Dabiyil Bajara, 2021, is a celebration of Quandamooka sea Country. The work is a document of care, of holding Country close, of mutual reciprocity between momentary custodians and the Country they care for ­– it is a work made about and emerging from mothers and daughters, and more broadly it is a story of life and death.

The work is a map, taking us on a journey of Quandamooka Country, above and below waterlines, from one side of Minjerribah to other, from places rich in sea life that have provided for custodians, to places of healing that have been visited by women since the beginning. The title of the work, Dabiyil Bajara translates to ‘water footprints’, a poetic reflection to the marks we make, and leave, if only for fleeting moments, upon and within vessels of water.

Created during the last few weeks of Elisa Jane’s pregnancy and at the time of the passing of Sonja’s sister, Elisa Jane’s Aunty, the work is a meditation on the cycles of life, on ancestral knowledge and on the legacies of First Nations women, who continue to weave knowledge from the past into hopeful futures, with care, courage, and compassion.

The following text was commissioned for Undertow, as a response to the narratives, themes and ideas in Sonja and Elisa Jane Carmichael’s recent works. Freja Carmichael is Sonja’s daughter, and Elisa Jane’s sister, and is an author, curator and artworker.

This is a selected glossary describing language, places, materials, and elements featured in Sonja Carmichael and Elisa Jane ‘Leecee’ Carmichael’s installation: dabiyil bajara. Rather than an alphabetically ordered list, meanings flow between one another.

Quandamooka
Our Country is beautiful Quandamooka, where the ocean currents meet with Moreton Bay. Quandamooka is sand, land and sea country and includes Minjerribah (North Stradbroke Island), Mulgumpin (Moreton Island) and southern islands and coastal areas adjacent to the Bay. There are three clan groups belonging to Quandamooka: Ngugi, Noonuccal and Goenpul. We are Ngugi people.

Matrilineal
Matrilineal stands for the long line of Ngugi women we descend from. Late mother (to Sonja) and grandmother (to Freja and Leecee), Joan Hendriks inspired us to be strong in our culture and to listen deeply with Country. She often said, “water is the living springs of mother earth.”

Mulgumpin
Mulgumpin is place of sand hills. Our Ancestors lived here prior to onset of colonisation.

Minjerribah
Minjerribah, also Terangeri, is neighbouring sand island to Mulgumpin. Our family home is on Minjerribah and it is where we listen, make, and connect on Country. We gather fibres for weaving; we care for the ocean by collecting the rubbish that washes ashore; and we witness cycles of nature with the changing seasons of flora and land, sky, and marine life.

Goompi
Goompi (Dunwich) is on the bay side of Minjerribah and connects the island to the mainland. The passenger ferries travel between Goompi and Cleveland, weaving their way around smaller islands and across the deep bay waters. The bay is home to plentiful marine life including dugong.

Healing rock
Healing rock, known as Adder Rock on Minjerribah, looks to the ocean and Mulgumpin in the distance. Waves crash around the rock and make pools that become temporal homes to small sea life. Like these ephemeral pools, healing rock has witnessed change in tides and times.

Moongalba
Moongalba (Myora) was a mission established on Minjerribah in late 1800s under the Queensland Aboriginal Protection Association. The missionary activity enforced European values on Quandamooka people and other First Peoples sent to Moongalba, resulting in a controlled life with language and cultural practices forcibly silenced. Traditions such as weaving were interrupted for a period of time, but knowledge was never truly lost.

Ungaire
Ungaire is our special weaving fibre, a reed that grows among the freshwater swamps of Minjerribah. Previous generations used ungaire for weaving gulayi (women’s bag). Over the past decade, Mum (Sonja) has researched historical bags housed in museum collections to regenerate the making techniques of Quandamooka Ancestors.

Talwapin
Talwapin (cotton tree) often grows close to the water’s edge. Past generations used the inner bark of talwapin to create string for making large nets. String-making remains an important practice today, representing a material link between past and present.

Pulan
Pulan (Amity Point) is a place on Minjerribah where the sunsets on the calm waters overlooking the bay. Buwangan (dolphin) often vist the shoreline; their presence evokes memory of place. Previous generations would use their hands, spears and sticks to tap the water’s surface, and call out to buwangan to bring the fish ashore.1 The fish would then be gathered using large nets.

Sea mullet
Sea mullet has sustained people for generations. Mullet’s seasonal migration through Quandamooka sea Country is marked by signs in nature. Past generation learnt that when mirriginpah (sea eagle) was seen flying seaward, this meant it was time to bring fish nets to shoreline and prepare for a big catch.2

Shellfish
Shellfish includes oysters, eugaries and quampies. The abundant varieties of shellfish, alongside mullet and other seafoods have been shared communally across time.

Mulumba
Mulumba (Point Lookout) on Minjerribah is home to rocky headlands and stretches of surf beach that bring in tides of shellfish and other sea gifts of country. On a clear day, turtles, manta rays, sharks, and pods of dolphin are seen swimming through the surf and in the cooler months, Yalingbilla (whale) journeys past the coastline.

Ghost Net
Ghost Net is a plastic fishing net or rope, lost or discarded in deep ocean, that continues to drift on its own, entrapping and killing marine life. This rubbish eventually washes ashore affecting the coastline. Where possible, we collect the marine debris and weave it into forms that represent resilience and cultural connection today.

Cyanotype
Cyanotype is an image making process that creates a deep blueprint through light exposure. In this work, cyanotype is used as a metaphoric expression of the layered meanings and experiences embedded in the sands, lands, waters, and cultural material of Quandamooka. The blue colour of cyanotype echoes the impression of Quandamooka sea country; waters that carry and sustain life and in turn these waters are carried by culture and people.