Angela Tiatia (Samoan/Australian, NSW) is an artist who works across performance, video and photography. Her practice is inflected by her Samoan heritage, and explores themes including gender, climate and colonialism.

In much of her work, Tiatia has used her own body as the subject, creating endurance performances that articulate the dynamics of power on both a personal and macro scale.

More recently, Tiatia has produced multi-channel videos in a documentary register exploring environmental change and its economic effects in the Pacific, as well as highly choreographed group performances engaged with the tropes of popular culture.

Angela’s Undertow work is available to purchase. Visit our sales page for details.

‘We should not be defined by the smallness of our islands but in the greatness of our oceans. We are the sea; we are the ocean. Oceania is us.’

Aotearoa-born, Sāmoan/Australian artist Angela Tiatia makes works that speak to Pacific identity, the impact of colonialism and the realities of the climate emergency in a global context. Tiatia shifts between performance, installation, and lens-based practice, often employing her body as both subject and medium in place-based endurance performance works.

Tiatia works grapple with race, power and gender and make nuanced critique on history’s influence on contemporary reality. Her works, particularly those which shed light on her own Sāmoan traditions and customs seek to question what is true of Sāmoa, and that which has been acculturated from western ideology throughout the colonial adventure.

Holding On, 2015, a documented performance work exhibited in Undertow, seeks to understand the reality of the climate emergency and sea level rise in the Pacific, the body of water that Tiatia’s own ancestral island home of Sāmoa is situated within. In the creation of this body of work, Tiatia travelled to Tuvalu, a small island nation in the Pacific which sits just metres about sea level.

In this performance, which took place at Funafuti, the main atoll of Tuvalu we bear witness to Tiatia laid upon a concrete slab, her body positioned purposefully in reverse cruciform, water lapping against her as the tide rises at the setting of the sun. The body positioning within the frame of the camera is purposeful, a comment on the faith and hope that so many place in a Christian God, to save their island homes, while science and the ever-rising waterline affirm another, more pressing and imminent reality.

Holding On, 2015, poetically and quietly unpacks the intimate relationship between people and place, between body of person and body of water, between the threat and the threatened. Tiatia weaves these elements which are often considered as separate or opposing, back together physically and emotionally. She does so in a way that signals the deep affection island communities have for the ocean-spaces that envelop their homes, reminding us of the inherent entwinedness these spaces have in the very fabric of identity and belonging.

The following text was originally published online for the exhibition ‘Inundation: Art and Climate Change in the Pacific’, which was presented at The Art Gallery, University Of Hawai’i At Mānoa (Honolulu, Hawai’i, USA) in February, 2020. 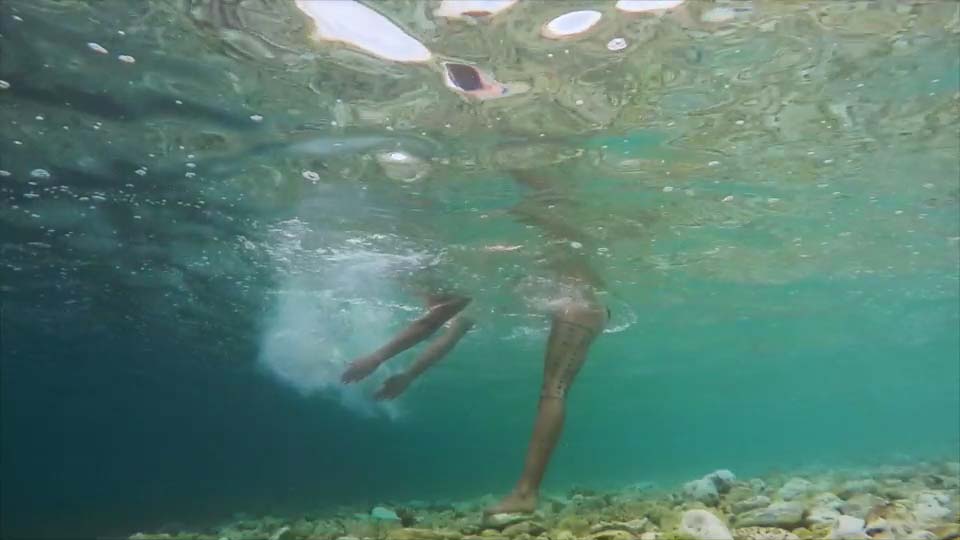 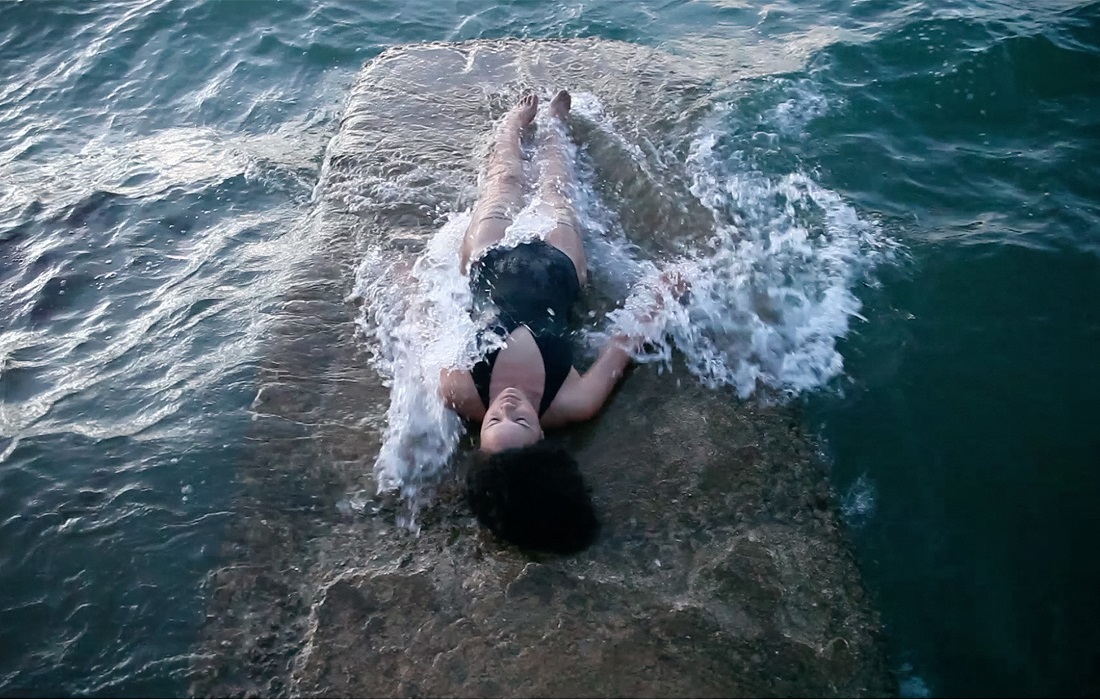 In these two performance videos, Lick and Holding On, Angela Tiatia collaborates with the rising tides of Tuvalu to invoke the power of the ocean and the presence of her Pacific female body. The performances came out of Tiatia’s growing concern about her coastal family home in Sāmoa. After eight years away, she witnessed a dramatic change in the land and sea. During that time the green grass, taro, hibiscus shrubs, abundant breadfruit, mango, guava, and frangipani trees had all disappeared. They had given way to a thick brown sludge coming up to her ankles. This experience led her to research climate change and to visit Tuvalu, a Pacific Island nation with strong historical, political, and economic connections to Sāmoa. The nine islands and atolls that comprise the nation each stand at an average of four and a half meters above sea level.

As Tiatia put it in a recent talk given for the Oceania Rising program at the Australia Museum in March 2018, she wanted to show climate change “not on a global scale but on an intimate one—to glimpse how life is lived in an environment where climate impacts are part of the everyday, rather than dramatic one-off events.” Holding On documents Tiatia at rest on top of a concrete slab as the ocean tide subtly rises and the sun sets. At first, the waves come over the slab periodically and shift her body. Over the course of a few minutes, as the tide rises and more water begins to submerge her legs and arms, it impacts her ability to stay centered on this manmade foundation.

While the performance alludes to Tuvalu’s extreme vulnerability to climate change, with warming, rising seas and eroding coasts, it also takes a much more personal and process-oriented approach than most climate change films featuring Tuvalu. As Tiatia recounts, before her visit she had watched many documentaries, including the well-known The Disappearing of Tuvalu: Trouble In Paradise, 2004, in which the situation is so intensely mediated by tropes of threat and disappearance that she needed to see the situation for herself, and hear people’s stories directly.

Arriving on the main atoll of Funafuti as a Samoan sister, and with the support of Australian Museum, Blacktown Arts Centre, and Casula Powerhouse Arts Centre, Tiatia committed herself to a different kind of filmmaking that would reflect and embody the multiple and often conflicting beliefs about climate change held by Tuvaluans. She filmed the daily cycles of life on the islands and, in the process, asked many islanders how they think they need to respond to climate change. She got a variety of answers. Some were most interested in seeking international representation for climate change as a way to reverse carbon emissions. Others were sceptical of international help and more committed to a view that God would intervene.  Reflecting on this conversation, Tiatia decided she needed to do a performance in which she could come to terms with these viewpoints, which in both cases seemed to put Tuvaluan lives in another’s hands, and in a position of sacrifice. Seeking an alternative way to feel and experience that position of embodied connection with the water, she lay on the concrete slab, her arms outstretched to both sides and legs placed together. In this cruciform position she then let the water wash over her. As the tide comes in and a crab comes to greet her, she is simply swayed by its rhythm, at times beginning to hold her head over the oncoming water, but still calm and focused.

Lick delves more into the process of collaboration between the body and the ocean waves. This video, played in slow motion and filmed underwater, begins with Tiatia trying to stand on top of a particular rock on the ocean floor with her arms stretched out in front of her and her head above the water. From below, viewers concentrate on the way she uses her legs and arms to keep balance as each gentle wave rolls past and “licks” her. The waves are not strong enough to wipe her out but instead seem to caress her. At moments, she sweeps her arms around and bends her knees to steady herself, bringing her body back into position. The water glistens with the abundance of light from the sun, and is clear enough to see the details in the ocean floor, fish, and Tiatia’s body. As the video comes to an end, Tiatia lets go of the ocean floor and allows the oncoming wave to pick her up and carry her out of the frame of the camera. Even more than in Holding On, viewers experience waves as supportive and buoyant, and the body as active and full of breath.

As in much of her work, Tiatia aims to show the rhythmic connections of body, identity, and place. Tiatia grew up between New Zealand, Australia and Sāmoa. Experiencing the urban settings of New Zealand and Australia as a Pacific Islander brought into focus the history of colonialism, and its exotification and commodification of Pacific female bodies (Eshraghi).  Before becoming an artist Tiatia worked as a model. Her understanding of how the global fashion industry, and the commodity industry in general, employs race and gender stereotypes has called her attention to the biopolitics of power in contemporary representations of Pacific Islanders. This has instilled in her work a desire to confront these depictions with empowered decolonizing images, oftentimes using her own body to exaggerate or denaturalize common performative gestures. In her ongoing Inventory of Gestures, she confronts tropes of commodified poses with her own awkward yet powerful poses. In Reflexivity (2013), she connects the history of displaying Pacific Islanders in human zoos with ongoing commodifying attitudes towards her body.

With the Tuvalu video series, she overlays this history with the consideration of how contemporary environmental representations of “drowning” Pacific Islanders on disappearing islands might also feed into histories of colonizing representation (Farbokto and Lazrus). She counters this sentiment with poses that explore strength and control over her own body in relation to, and in communion with, the elements. Especially in Lick, Tiatia stands and floats with power and certainty. Because the camera is positioned beneath the water, the viewer concentrates on Tiatia’s legs in particular, and on her malu, a tattoo specific to Samoan women.  In Tiatia’s view, the value in wearing the malu, and having it play such a central part in celebrating her role in protecting relationships between family, community and environment. If the malu is a reminder to her of her responsibility, it is a reminder to viewers of the power and presence of Pacific Islanders in confronting the issues at hand.

As viewers watch Tiatia’s choreography with the waves, there is a powerful understanding that the ocean does not really pose a threat to her survival. Instead, her concentrated engagement expresses a willingness to experience, understand, and work with the elements and environment. If tidal changes are inevitable, how can the body re-compose gestures and rituals learned from actually inhabiting ocean waters?