Marked by intimate and evocative gestures, his work often combines physically demanding durational performances with sublime landscapes – exuding a sense of awe and dark optimism whilst examining human and environmental fragility.  Across Capone’s works there is an unflinching drive to understand human thresholds and the timeframe of a single life.

Your work Echo & Abyss – an immersive video installation filmed across natural environments in Switzerland and Greenland – is partly inspired by the poet Rainer Maria Rilke, in particular his Duino Elegies. Can you explain why you were so struck by Rilke’s work?

In late 2016 I undertook a residency at Villa Ruffieux in Sierre, Switzerland, not far from where Rilke lived and worked. Before going I acclimatised myself comprehensively with his work and was continually drawn back to the Duino Elegies.

I felt certain parallels with things I had explored in my practice previously, and because of this it only made sense to use the text as a reference point whilst I was based close to the Château de Muzot, his permanent residence. There’s an immediate energy I felt through the text, and how it embraces and explores the limitations of what it is to be human.

Your work often sees you place yourself within stark, freezing landscapes, from immersion in a Swiss lake in winter to peering over cliffs in the Bernese Alps. How do you go about capturing the footage? Do you film them all yourself?

I really prefer to be self sufficient, to work independently and take on as much of the work load as possible. Having said this though there are some times where my partner will help where safety is compromised.

Embracing failure is part of the process. Knowing small yet simple things are going to be extremely difficult to capture and are going to need a great deal of time invested in them. Patience and a willingness to endure are prerequisites that are sharpened through repetition. 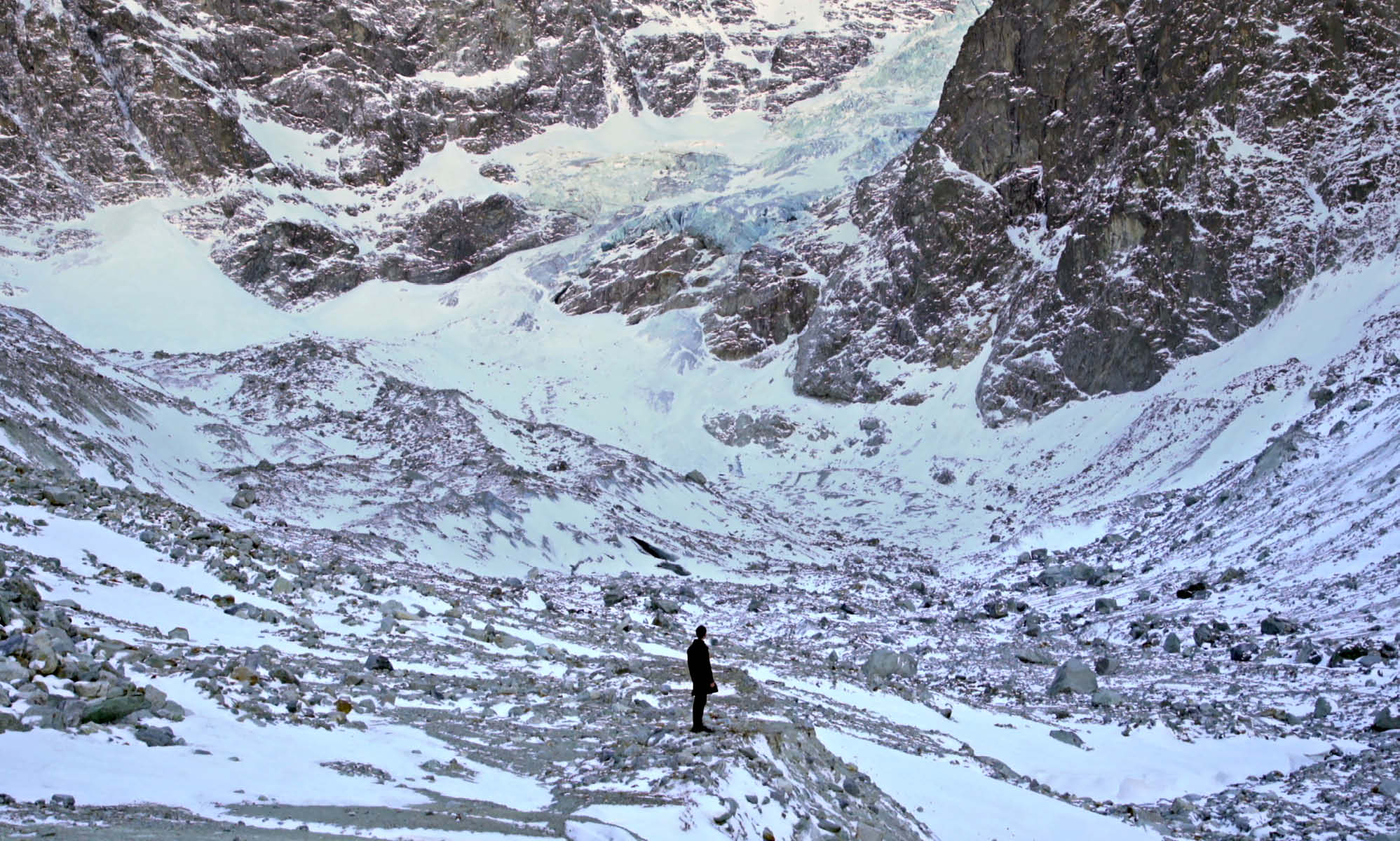 What’s the hardest part about filming in these kinds of environments?

It was winter whilst in Greenland so sometimes it was minus 30 degrees centigrade before wind-chill, hence trying to film is incredibly difficult. Batteries die rapidly, lens freezes and  screen displays lock up. Then there is the very real risk of frostbite and hypothermia from prolonged exposure. Just breathing outside can be difficult. Sometimes your eyelids freeze shut.

A lot of the locations were remote or volatile, so you need to be committed and feel comfortable firstly getting to the site, working and then getting back safely.

I understand you worked with a composer to develop the soundtrack for Echo & Abyss. What kind of mood or feeling you were hoping to convey within the score?

I was very fortunate Alex Turley, an Australian composer, agreed to work on the score. I provided a rough first edit of the whole project and really left the creative process up to him. He was aware of the conceptual rationale behind the project and already knew there was a sense of foreboding to potentially embrace and work with.  The last thing I wished to do was to create parameters and restrict whatever he felt, so I left it totally open to him to respond to.

Your work Thanatousia – which features 34 flags, one for every year of your life – was a collaboration with your mother. Can you explain this familial connection to the work?

This project had a long gestation period and I began it properly in 2019. At first it was going to just be a one off flag, but I knew it needed much more of a earnest commitment. Both to learn from and to offer.

To individually make the flags was necessary. Throughout my childhood and teenage years my mother Maria Gomes ran her own banner and flag making business. She taught me sewing skills as a child, so asking her to collaborate on the project was second nature.

At the project’s heart was us coming together in the studio at FAC to work on the flags on a weekly basis. Spending this allocated time with my mother, as well as our usual catching up, on a continual basis for 6 months was a gift. The conversations, the silences shared, was all a powerfully enriching experience. We didn’t necessarily sit around talking about mortality, but the simple act of making the flags repetitively couldn’t help but change the way we both feel about the subject.

There was a process put in place whereby I wanted to cut and stitch all the lettering of the flags. My mother would then hem, and finalise the overall flag. I dealt with the sentences, my mother framed them.

The flags alternate through three phrases: “You will die. I will die. We will die”. What exactly about mortality – and our language around it – are you interested in exploring?

I’ve always been interested in the human dependence on words and language to give meaning. And the degree by which we become enslaved by it. Through the repetition of alternating sentences on the flags the significance of the statement fluctuates. It becomes both enshrined and exhausted. Meaningful and meaningless.

The project functions as a means and methodology hoped to aid in being liberated from the weight of one’s mortality. And through this liberation surrendering more fully to life. 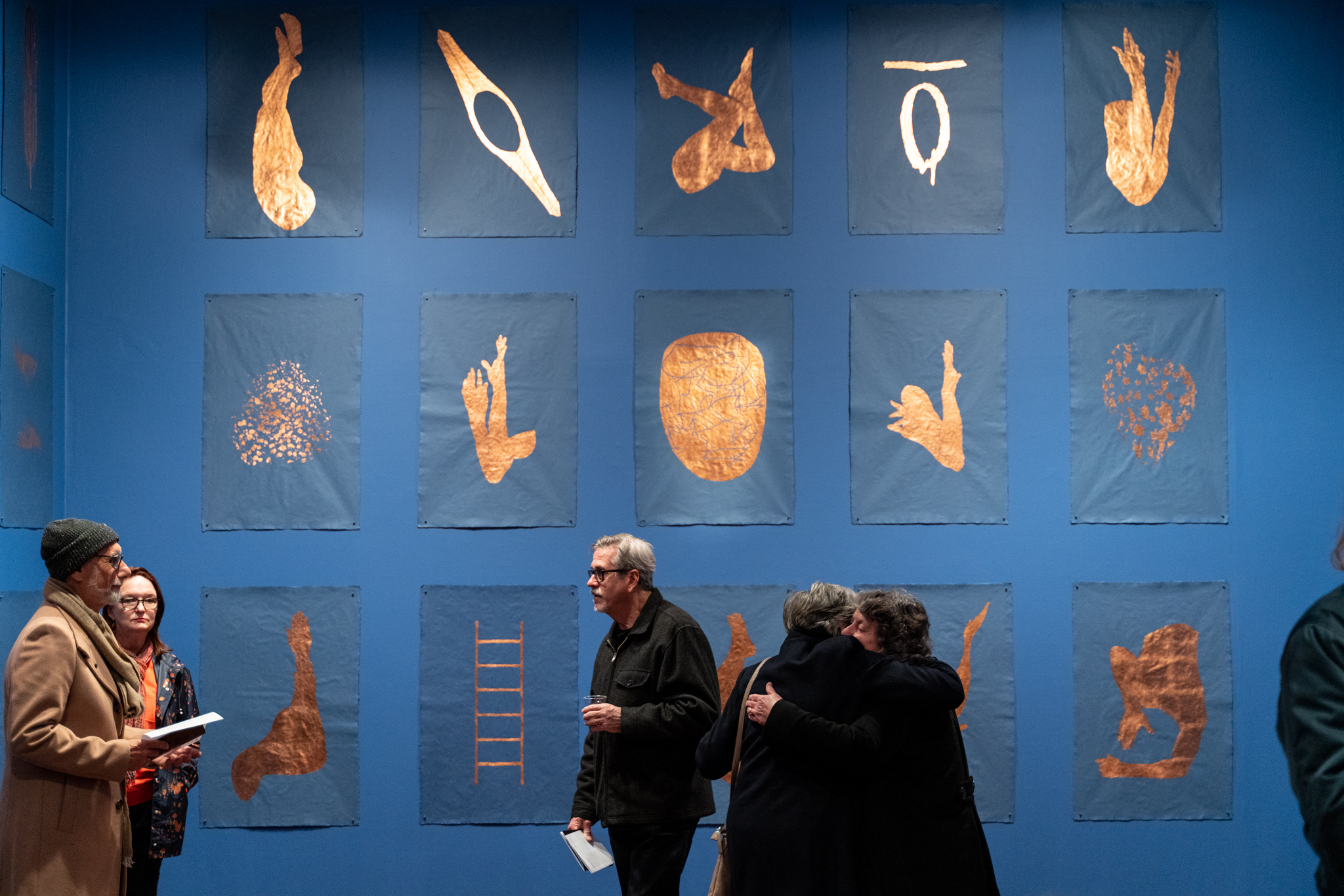 Your work Perdition & Prayer is a series of over 100 works on paper combining copper leaf, volcanic ash and glacial water on Japanese Mingeshi paper. What was the rationale behind using such unique mediums?

I’ve collected a lot of natural materials throughout years of working site specially across different countries. Various bodies of waters, stones, ashes, sands etc. Because Perdition & Prayer embraces every minuscule component that informed and shaped each previous performative undertaking it only made sense to introduce these collected elements into the paintings.

Namely volcanic ash from Iceland was mixed with glacial water from Svalbard and Tasmania to form the painterly base for all the works. Copper leaf was then applied over the top. Archives of images, words, objects, artefacts, thoughts, research and inspiration from previous projects informs the imagery of the works. Deciphered and distilled series of symbols. An iconography of sorts.