Ahead of her upcoming Artist Talk and Catalogue Launch, Deanna Hitti spoke with FAC about her exhibition Object of the Game, and the heart-rending experiences of grief, loss and cross-cultural connection that inspired it

An Australian artist based in Melbourne with Lebanese heritage, Deanna Hitti’s practice often explores the diverse cultural traditions that co-exist in Australia, as well as migrant identities and the nuanced representations of the East and West.

She won the prestigious Fremantle Arts Centre Print Award in 2018 with her artist book Towla, which explores the cultural significance of backgammon in Lebanon, setting out the rules of the game in the Arabic and Latin alphabets. Her latest exhibition Object of the Game, showing at FAC till 18 July, brings this exquisite work back to Western Australian audiences, alongside a new series of work including an instructional audio-visual projection, interactive backgammon display and large-scale cyanotype screen-print titled Object of the Game.

Your book Towla features the instructions for backgammon (Towla) in both the Arabic and Latin alphabet. Why are you so interested in exploring the ancient tradition of Towla and what does it mean to you?

The work is about growing up in Australia and the third culture that often emerges amongst migrant communities. My parents were born in Lebanon, so growing up I had to contend with their traditions and ideas at home, as well as those of the local culture I was learning at school and from socialising. Although I have to say it wasn’t much of a social life as I wasn’t allowed to go out much! The home life was very central, and it was very traditionally Lebanese. My father and I were both very headstrong, and Towla was a way of bridging the gap between us, of solving our cultural differences. Instead of talking through an issue, he would simply say, ‘let’s play’. Even if it was just half an hour, nothing else really mattered during that time. 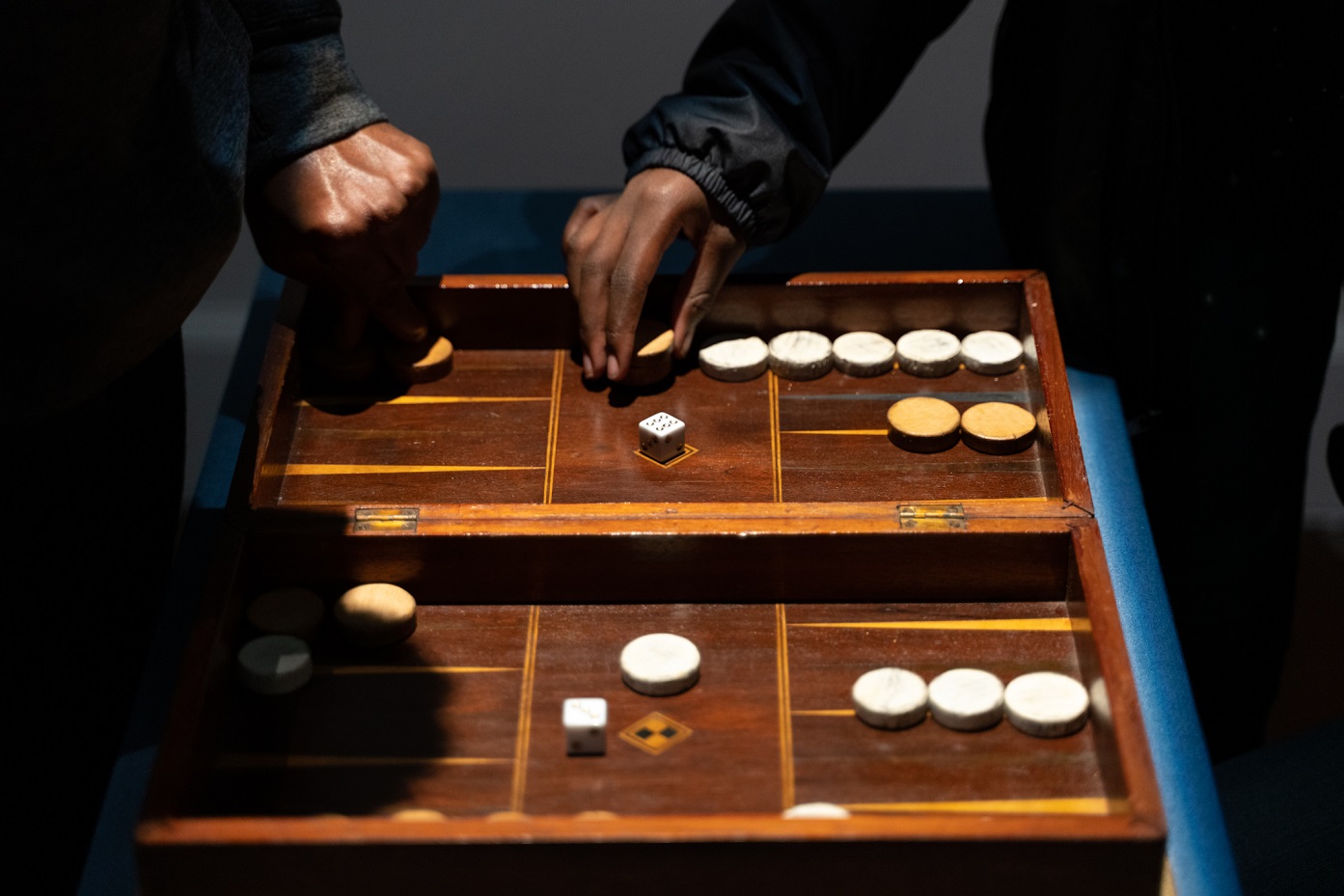 Your late father Antonios El Hitti helped you to co-create the translations. What was the thinking behind collaborating with him on this project?

My dad and I, we would text all the time. And when we spoke, there was always some kind of cultural transaction happening, as he might speak to me in broken English and I would respond in broken Arabic or vice versa. It was always a play with language. So, I thought we could flesh this out a little bit with the rules of backgammon and turn it into a book, with the English and Arabic letters sitting together side by side.

I understand that Antonios suddenly passed away in the midst of this project. How did you go about completing Towla in his absence, and how did his passing impact the work?

Yes, my father was in Lebanon and we received an unexpected phone call from a relative to say that he had passed. It was quite a traumatic time for my family, we were all just trying to hold it together. I was grieving and I found it difficult to focus on normal day to day activities. Towla was one thing I seemed to have energy for. It was a way of dealing with the sudden loss and contending with all the thoughts and feelings that were running rampant in my head.  It ended up being a way to hold his memory. The translations for Towla were about three quarters done and I asked my Syrian friend Katarina Acher to assist me in completing the translations. Finishing the book after my father passed away was quite contemplative and, in a way, a healing experience. That’s the great thing about artist books for me. I can create a contemplative space for myself and the audience to talk about many personal and social themes. It all comes back to time.

In 2018, you won the Fremantle Arts Centre Print Award with your artist book Towla. How did it feel? Did it come as a surprise?

I got a phone call from Emma Buswell (FAC Print Award Coordinator) which I missed. I assumed there was something wrong with the work, or that it didn’t arrive or something. And then I called back and she just said, “I’ve got some news for you, you’ve won”, and it was magic. It felt as though the art world was mine just for that moment. To be recognised by your peers in such a highly regarded Award, it was just an ecstatic feeling.

And how does it feel to be back here to present Towla alongside a new series of works for Object of the Game?

It’s wonderful to be back. I worked with Andre Lipscombe (Curator, City of Fremantle Art Collection) to develop the exhibition, alongside artist Steven Alyian who was instrumental in developing the multimedia and sound. They were both fantastic to work with, very thorough and understood my vision while offering their own expertise. Fremantle has such a great sense of community and the Arts Centre is well respected, so it really is a joy to exhibit here. 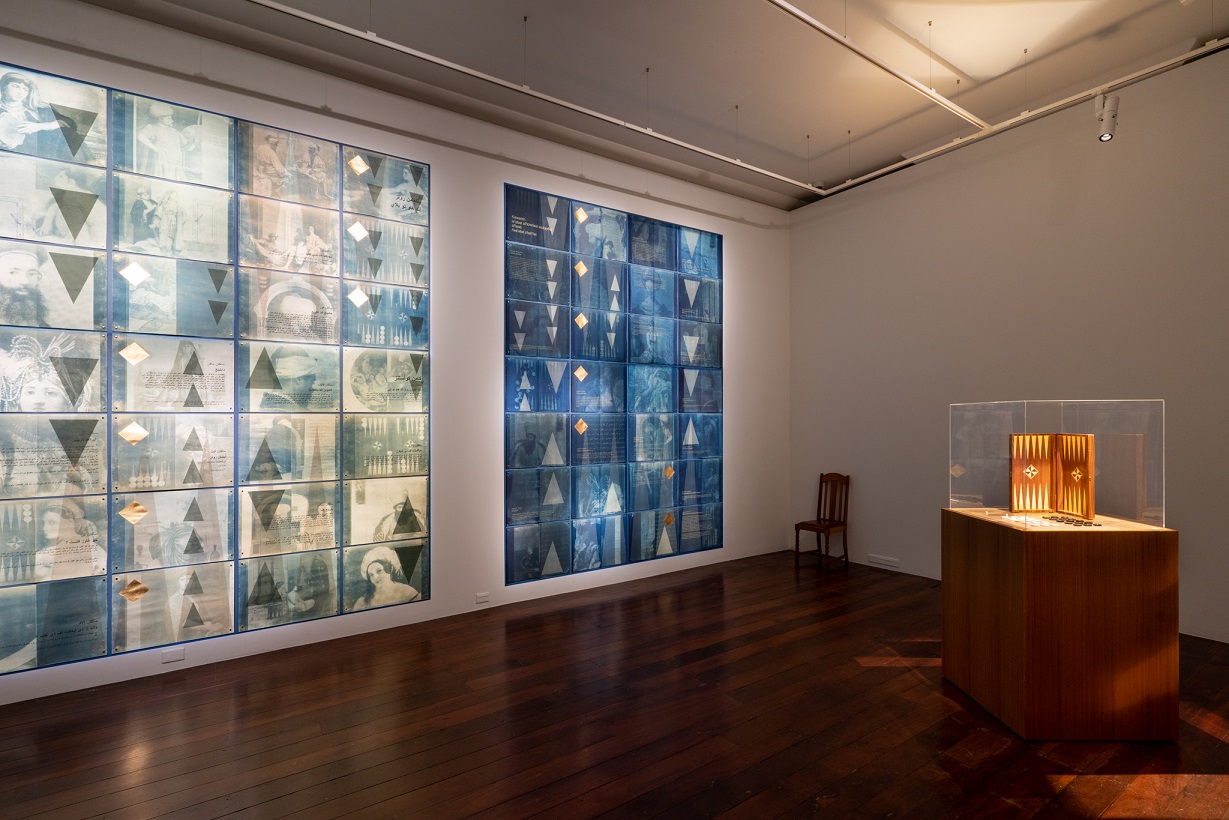 The exhibition also features a new work titled Object of the Game, which features an image of La Grand Odalisque, the famous oil painting of a young girl from the Middle Ages. Can you explain what this is in reference to?

This work appropriates imagery from the European Masters to question preconceived notions of Middle Eastern identity. In the west, most of our understandings of Middle Eastern people come from 18th century writers and painters, most of whom never actually went to the region. I scanned books and took fragments of images, reproducing them in cyanotype and then printing again on top of it with Arabic lettering and some Towla symbols. The world we live in today is so politically loud, I like to make art which is quiet and contemplative. With paintings people often quickly make a judgement call, but I hope that Towla and Object of the Game encourage people to sit with it a little longer and let the message wash over them.

Keen to hear more? Come along to the Artist Talk and Catalogue Launch on Saturday 19 June from 2- 4pm. After a relaxed floor talk, Deanna will unveil the Object of the Game catalogue, a 40-page, limited edition publication produced in Arabic and English. Deanna Hitti: Object of the Game is showing at FAC till Sunday 18 July.