Melbourne-based artist Alison Kennedy has taken the coveted first prize in this year’s Fremantle Arts Centre Print Award with her work ICU. A large-scale self-portrait made using white ink screen-printed on 30 industrial polyacrylic panels, ICU explores women’s work and the hidden labour of underrepresented groups. She wins $16,000 in prize money and the print will be acquired by the City of Fremantle Art Collection.

This year’s judging panel – Felicity Johnston, Rachel Salmon-Lomas and Lia Mcknight – commented, “Alison Kennedy’s skilfully composed work ICU is a brave and poignant portrait of the artist in her studio, her face and body partially obscured by glitches that reveal the artist’s use of digital technology.”

“Kennedy combines laboriously hand printed silkscreen with 3D modelling techniques, exploiting the effects of pixelation to create a seductive granular quality. Printed onto industrial acrylic sheeting, the work is one of many in the exhibition that is multi-panelled. In this case the glossy, reflective surface provides a sensual quality to the work that mirrors the viewer, placing us within this oversized portrait.”

Alison is a Melbourne (Naarm) based artist who combines technology, malfunction and handmade media. Her practice is grounded in a desire to reveal what is hidden through closely observing the artistic process as it twists and turns. Underneath it all she asks, “When does something make sense?” This often leads to artwork that surprises herself as well as others.

Her work and research have been critically received. Kennedy was included in the 10 year survey show of Leipzig International Art Residency (Germany) and in the 2021 ANAT DNA research residency program. She has exhibited widely in Australia and Germany. She recently graduated with a Master of Fine Arts (Research) from Melbourne University, where she won the Fiona Myer Award in 2019. 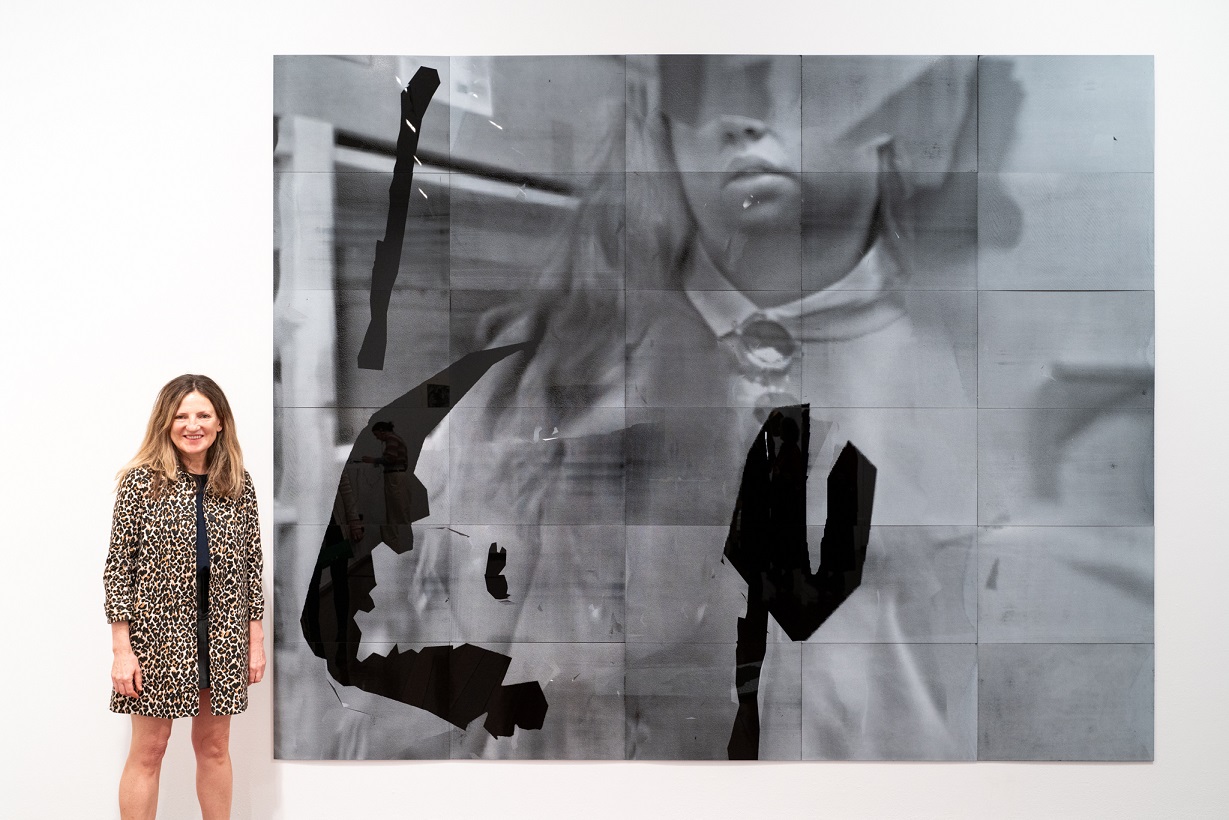 ICU (2019) valorises the female artist in her studio and is part of the artists’ overarching concern with expressing women’s work through meshing technology with printmaking. The artist says of the work: “The latter is crucial as it is through this refined laborious process that woman’s work is expressed as both method and subject. It is important in my practice that technology acknowledges and represents the role of the human body in perceiving and creating the world.”

In creating this work, Kennedy has transformed an image of herself at work in the studio, through scanning into a 3D model. Her image, altered by a technology pushed to the breaking point, becomes amplified, refined and clarified through the process of print making. The materiality of the work showcases the orthogonal individual white specks, almost like the detail found when zooming in on a bitmap. The large scale valorises hidden labour of the underrepresented – the technological obfuscations both blind and reveal. ICU invites you to consider, who exactly sees who? 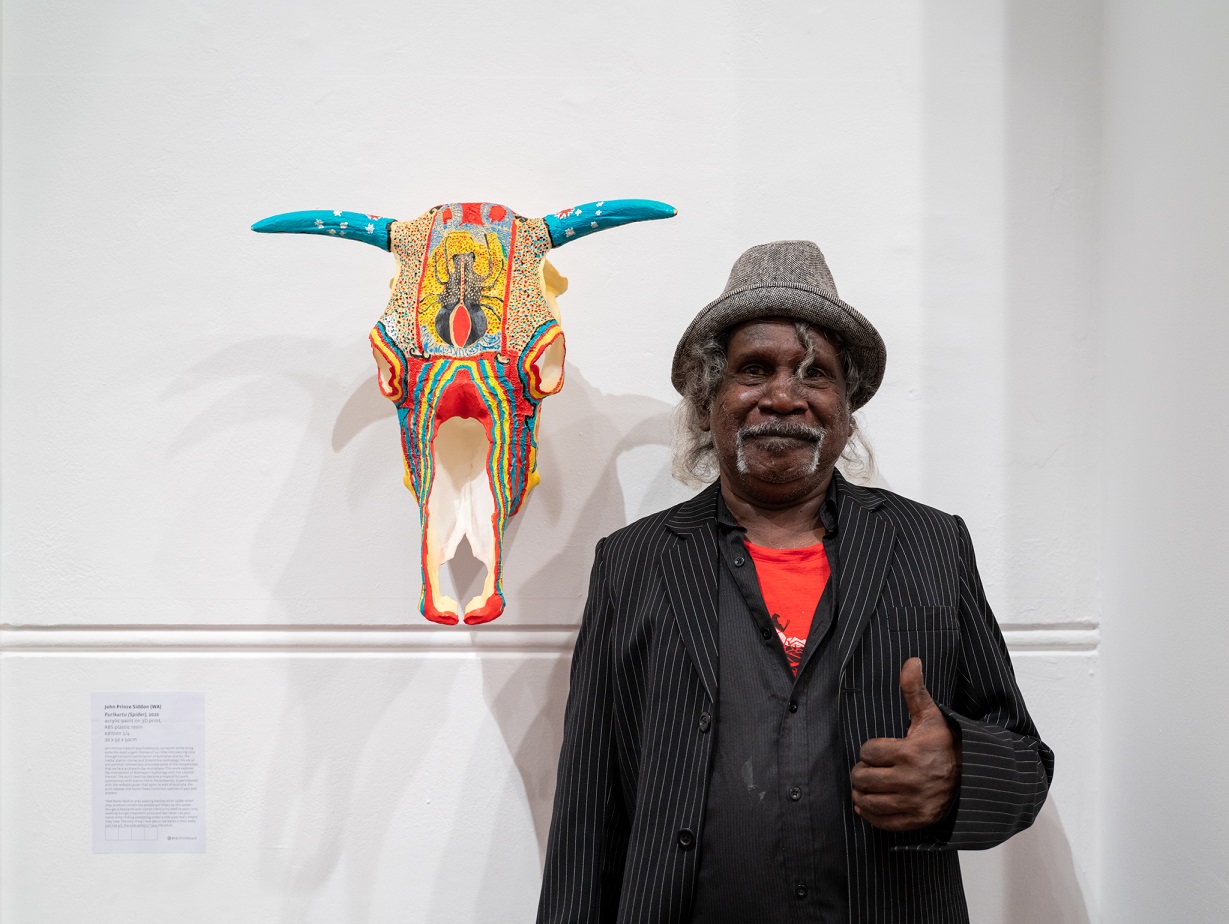 Walmajarri artist John Prince Siddon has been awarded the second prize for his work Purlkartu (Spider), a 3D printed cow skull imprinted in his bold, distinctive painting style, referencing his Country and culture. He receives a $6,000 cash prize. The judging panel said of his work, “Purlkartu (Spider) is arguably the most vibrant work in the exhibition.

Having painted cow skulls for many years now, Siddon has hand painted a 3D printed skull, the surface of which features a lace or skin-like texture, derived from one of his 2D paintings.”

“Dynamic and raw, it reflects the bold landscape and intensity of light characteristic to Siddon’s home Country in the Kimberley. This work is very much in keeping with Siddon’s distinctive and eclectic style, a magnetic combination of imagery and colour that references Country, culture and the bloody histories of colonisation.”

John Prince Siddon is a Walmajarri man born in Derby in 1964. Currently based in Fitzroy Crossing, he is the son of Pompey Siddon, one of the founding painters at Mangkaja Arts Resource Agency.

Moving between 2D and 3D surfaces he renders confronting imagery inspired by national and global issues he sees on television, his own story, desert iconography and the Narrangkarni (Dreamtime). Prince has been a regular finalist in the prestigious Telstra National Aboriginal And Torres Strait Islander Art Awards since 2018 and was highly commended in the 2018 King & Wood Mallesons Contemporary First Nations Art Award.

John Prince Siddon Prince has been painting cow skulls in the Kimberley for many years and Purlkartu (Spider) is an extension of this practice into another media. The work was developed over a 12 month period in collaboration with Head 3D and Emilia Galatis Projects.

The process involved selecting a 2D art work to imprint, and employing this as a textural relief over the surface of the 3D print to create a lace or skin like texture. The work was printed after many months of refinement, then taken back to Fitzory Crossing to be painted. Purlkartu (Spider) is in line with Prince’s depictions of station stories and the horror of colonisation in the Kimberley, and is emblematic of the artist’s ability to straddle two worlds, challenging the accepted place of remote art making.

Beth Ferialdi
I’ve Been Meaning To Give You These, 2020