The Minyma Kutjara Arts Project was initiated by the people and artists of Irrunytu. Irrunytju (Wingellina) is a small, very remote community located 10kms from the tri-state border of WA, NT and SA. Established in 1975, Irrunytju is part of the Ngaanyatjarra Lands and is home to over 150 Anangu (people) who primarily speak Pitjantjatjara language.

Lynette Brown was born at Malara, west of Kanpi Community in the APY Lands of South Australia. Her parents were travelling by donkey and camel from Amata towards Mount Davis when Lynette was born. She now lives in Irrunytju and belongs to the Pitjantjatjara language and cultural group. She is the daughter of well-known artist Anmanari Brown, and is a senior artist with the Minyma Kutjara Arts Project. Brown’s sculptural works and paintings are narrative-based, telling the stories of life on Country and in community.

Old Model was inspired by the early days when white people travelled to the area in their old model cars. “There was a big bomb coming and they were taking the people to Warburton Mission so they could be safe,” she said. 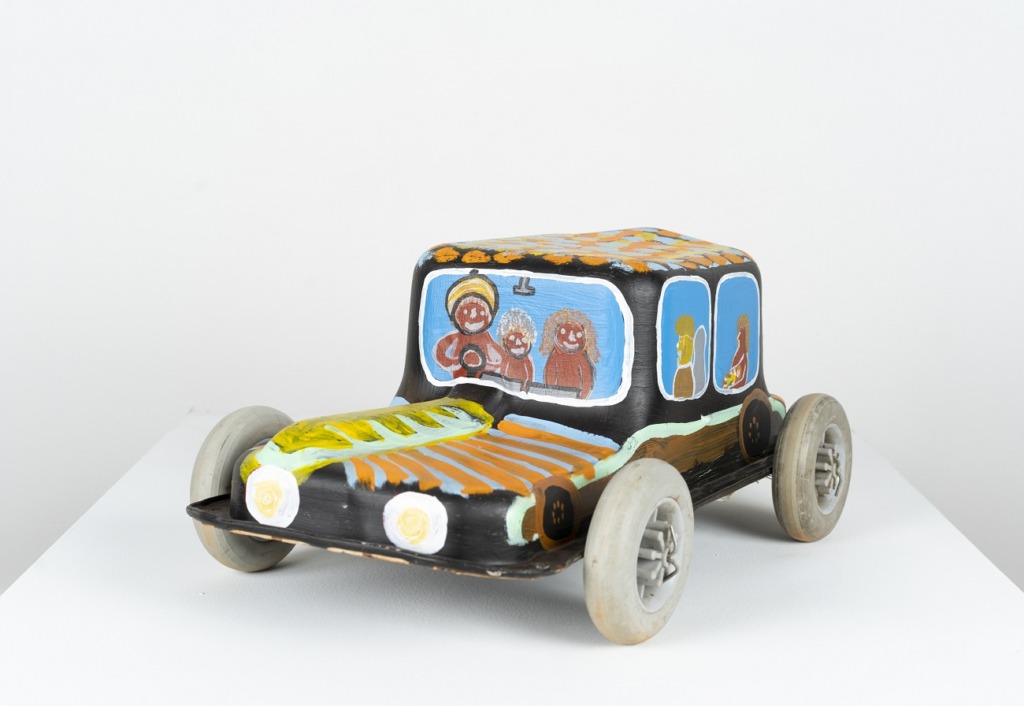 Sally Ann Wipana Foster was born in in 1972. Her mother and father are highly respected elders from the Ngaanyatjarra Lands of Western Australia. Foster lives in Irrunytju and belongs to the Pitjantjatjara language and cultural group. She is a mid-career artist who works across a number of mediums. The narratives in her works include stories of community life and the Country around Irrunytju Community. She also makes tjanpi (grass) sculptures and carves punu (wood) artefacts.

Inspired by the early 90s, Sally Ann created a Mamu (monster) truck that would travel all over the Ngaanyatjara Lands taking families to Blackstone, Jameson, Warburton and Warakurna. It also traveled to Cundeelee taking people to the Mission. “One day we all traveled in the back of the truck to Alice Springs, where we left the truck and traveled onto Mataranka for Inma (dancing). That truck now rests in Wingellina car yard,” said Sally Ann. 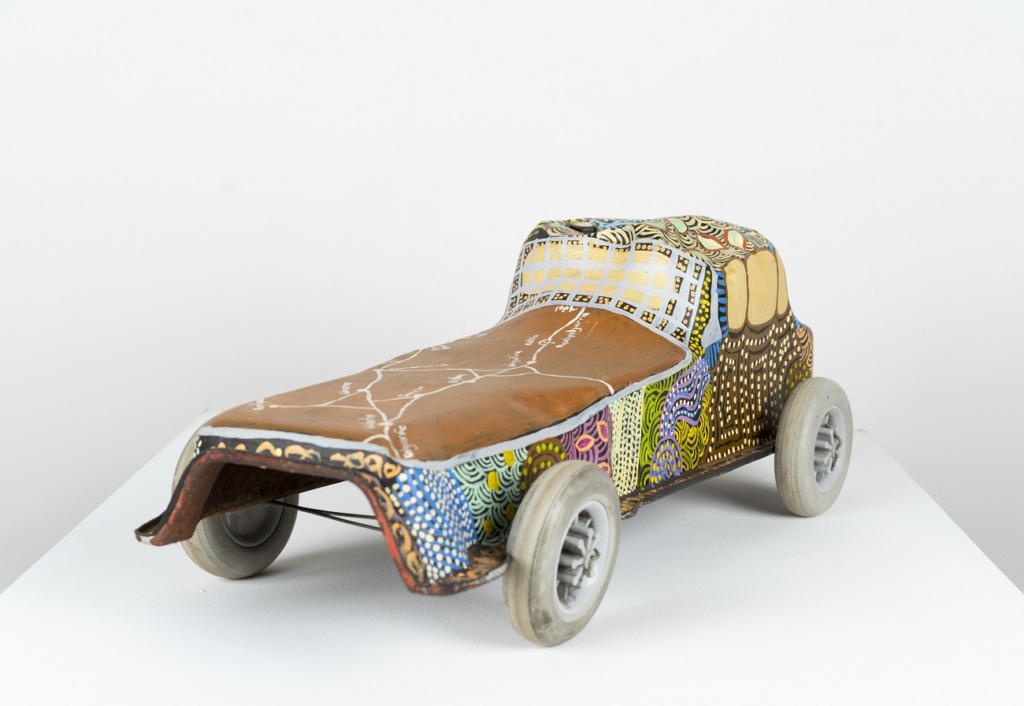 Yangyangkari (Roma Peterman) Nyutjangka Butler was born in 1959 at Wilu rockhole on the kanyala (euro kangaroo) tjukurpa track. She spent her early years at Ernabella Mission in South Australia before travelling by camel to Warburton in WA, where she went to school and learnt to read and write. Yangyangkari now lives in Irrunytju, her grandfather’s brother’s Country where she is a senior artist for Minyma Kutjara Arts Project. She also works with Ngaanyatjarra Media presenting a radio program of local music and news. Yangyangkai was taught to paint and tell tjukurpa (stories) by the minyma pampa (old women), especially Kuntjil Cooper. She also practices traditional cultural activities including hunting and gathering bush foods, singing and dancing inma (ceremony), and works with tjanpi (grass).

Roma’s car sculpture depicts the story of Minyma Kutjara (two sisters) that had travelled to Ngayan. The young sister had many young kids and said, “I’ve got too many children, I’m going to leave them here at Ngayan.” The two sisters continued travelling and they heard a whistling sound, it was a man following them. They were frightened, so they dug a hole in the sandhill and hid from the man. In the morning, the older sister said, “I’m taking you to my Country.” They then danced and told stories. 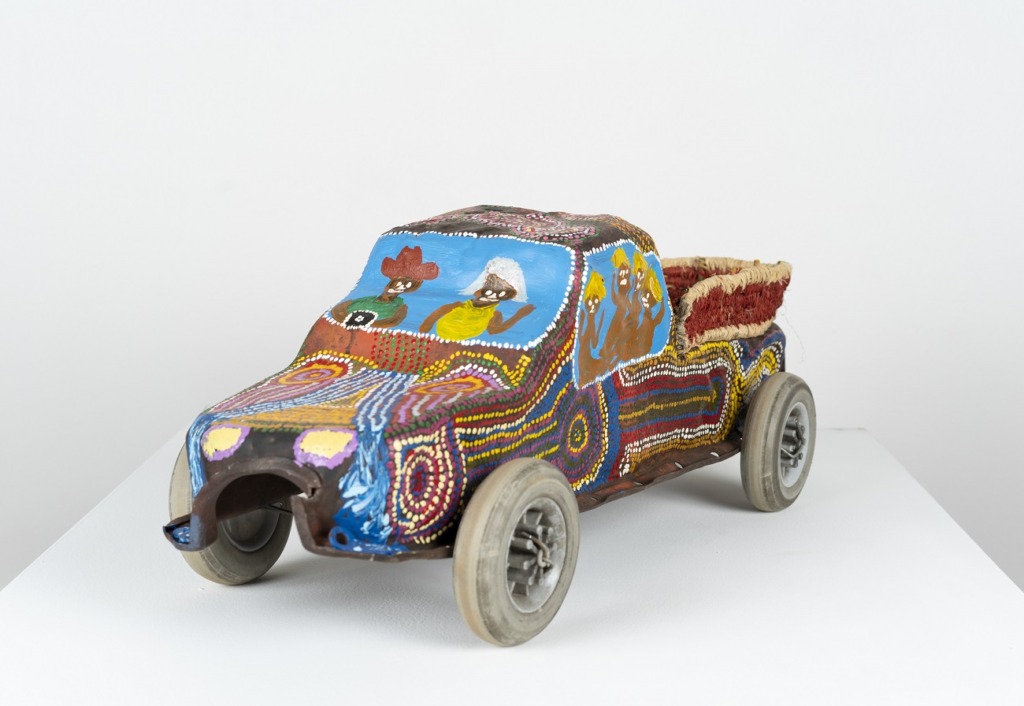 Maureen Tjalumi Nelson was born in Amata in 1973 and now lives in Irrunytju. An emerging artist, Nelson works in both sculpture and painting, telling stories of her local community and Country. She belongs to the Pitantjara language and cultural group and is the eldest daughter of Rene Nelson, a senior artist with exceptional bush skills.

Maureen called her car Joyrider. “It takes me everywhere, swimming, out bush, funerals, Pipalyatjara and Kalka, to all my favourite places,” she said. 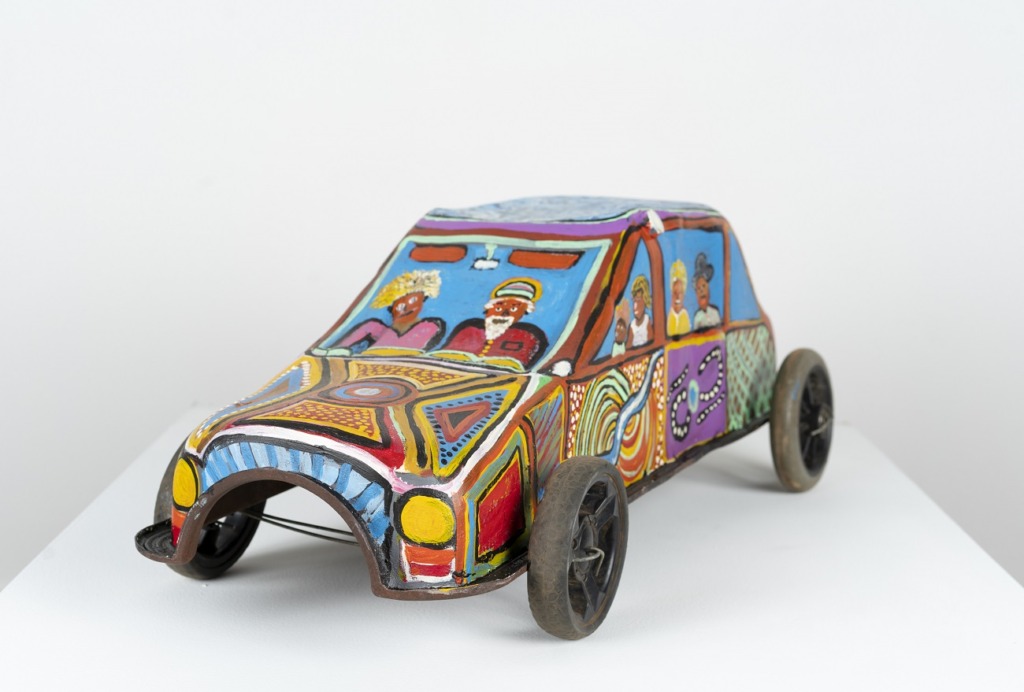 View all of The Minyma Kutjara Arts Project works and the full Revealed Exhibition at FAC until Sunday 26 July. Free entry