Ninuku Arts is a wholly-Indigenous owned and governed art centre which supports artists from two communities – Pipalyatjara and Kalka. Each have populations of around 100-150 Anangu people and the majority are Pitjantjatjara speakers. Anangu means ‘people’ in Pitjantjatjara.

Both communities are located in the far north western corner of South Australia, near the tri-state border of South Australia, Western Australia and Northern Territory. The art centre prides itself on its inclusivity by providing opportunities for all generations and embracing individuality in artists.

For the Revealed Exhibition, four artists with vastly different artistic styles have been selected. Selinda Davidson was born in Alice Springs. As a teenager she moved to Irruntyju and then Pipalyatjara. After finishing school she became a member of Ninuku Arts, painting regularly as well as working as an arts worker. Davidson works alongside her grandparents Jimmy Donagan and Molly Miller and has learnt from them how to paint tjukurpa (Dreamtime), translating stories into her designs and traditional mark-making. For Revealed she has created two beautifully painted blown glass vessels.

Judy Miller is a dedicated artist and integral member of Ninuku, she also works as a retail assistant and arts worker.  Judy’s mother is Molly Nampitjin Miller, the founding director of Ninuku Arts. During the 1970s and the Homeland Movement, the family moved to Pipalyatjara before moving to Kalka, where Judy is still based today with her family. Like many Anangu women, Judy has learnt skills in punu (wood carving and burning) and tjanpi (grass weaving), where she has proven to be extremely proficient. Her paintings often depict designs associated with Kungkarrakalpa Tjukurpa (the Seven Sisters Dreamtime story) and her bush tucker knowledge. 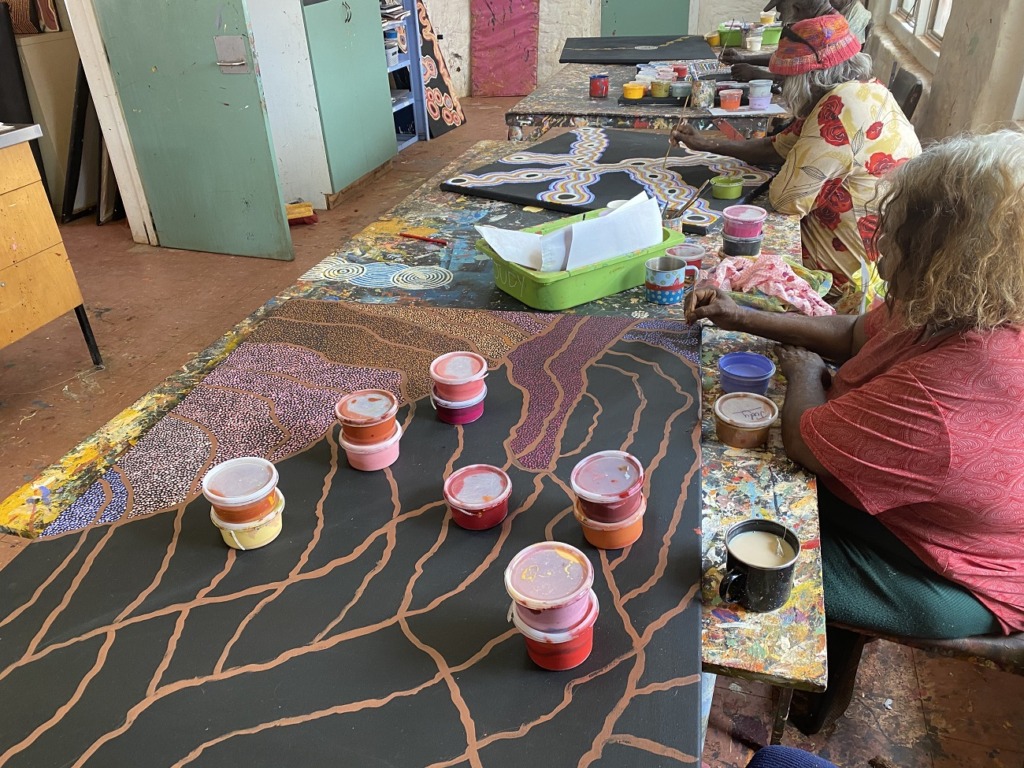 Rita Watson was born in Warburton, a remote community in WA. She is the daughter of renowned Irrunytju artist, Tjuruparu Watson. During her younger years she spent a lot of time travelling across the NPY Lands, particularly between Irrunytju and Amata. Today she lives in Kalka with her husband. As an artist Rita is extremely passionate, dedicated and hard-working. Her artworks are heavily influenced by her father’s Country, Illurpa, from which she paints striking, iconographic designs using a combination of soft, feminine colours with bold graphics. 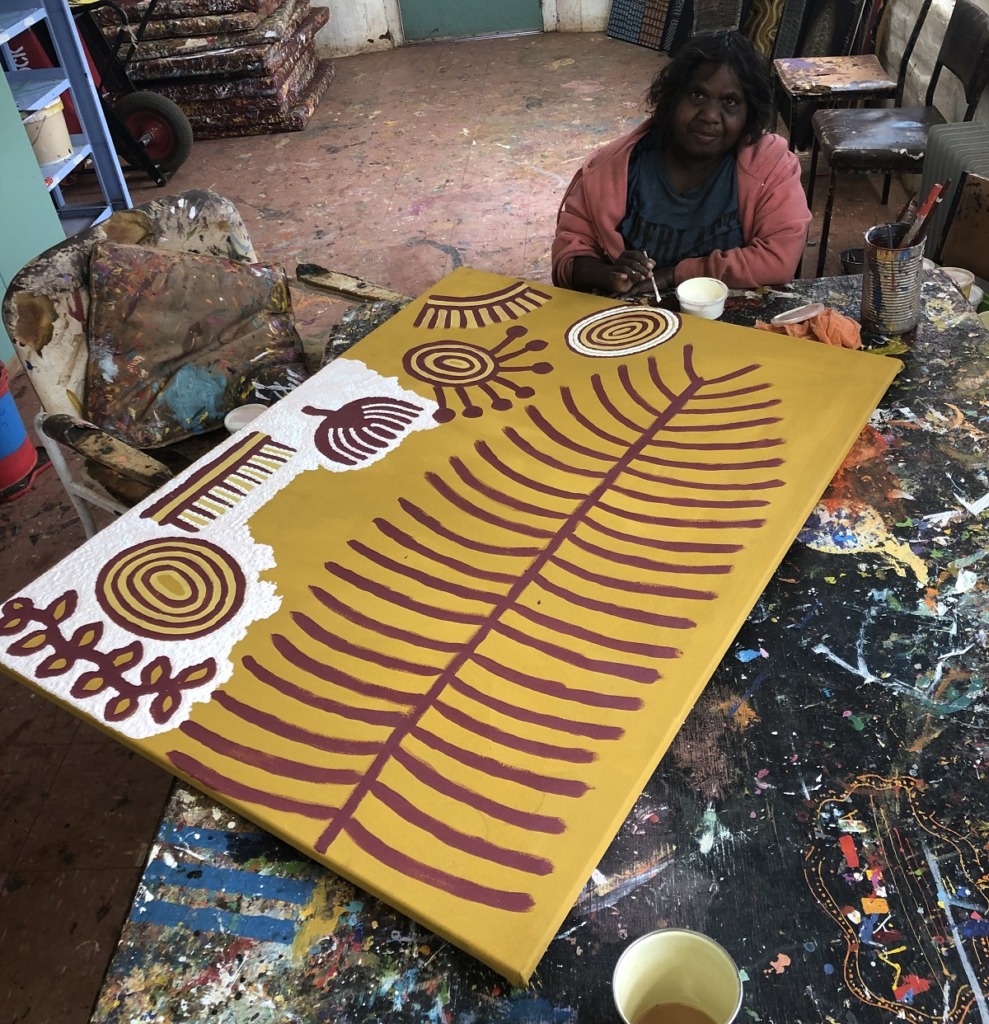 Finally, Cassaria Young-Hogan rounds out the Ninuku Arts group. Her mother is Susan Young. Young-Hogan grew up in Kalka Community and attended school in Pipalyatjara. She has two sisters and now lives with the Young family in Pipalyatjara Community. She has three works on display, one large scale painting entitled Bush Trip and two blown glass vessels Tjukulua Tjuta and Bush trip. 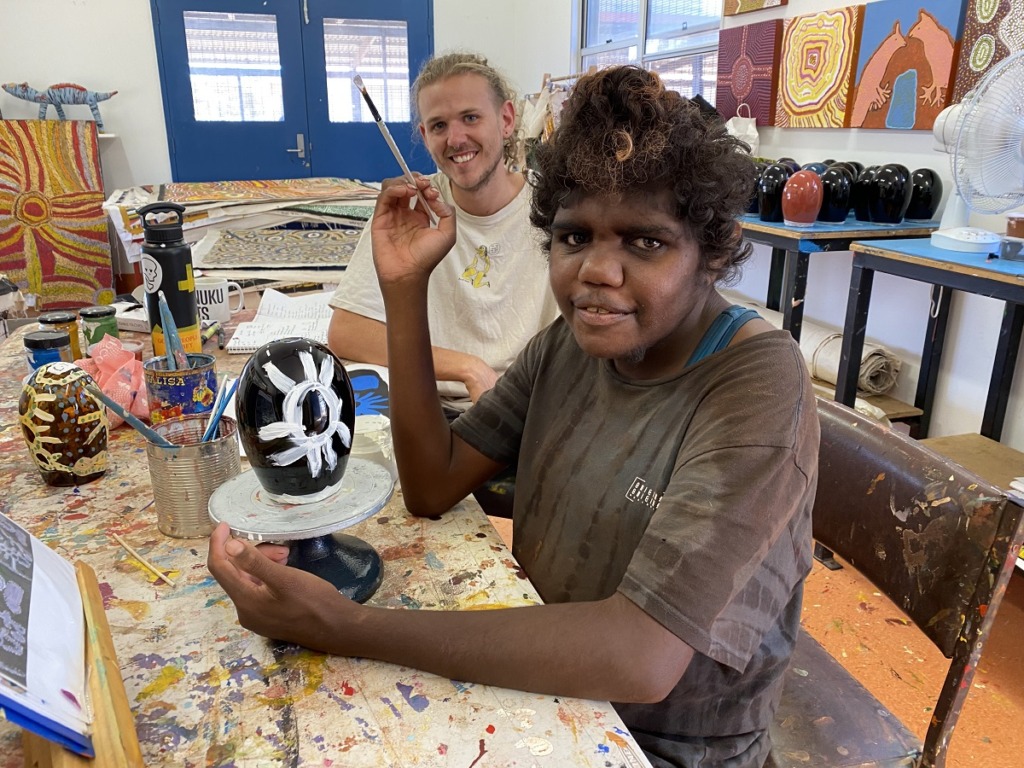 View all of the Ninuku works and the full Revealed Exhibition at FAC until Sunday 26 July. Free entry