Bush Women was originally shown in 1994 and marked a significant moment in WA art history, highlighting the practices of senior female Aboriginal artists from remote parts of the state for the first time.

The collection of paintings, some of which were created at FAC during artist residencies, showcased a wide, varied and often surprising style of works. The exhibition’s original curator John Kean said “Bush Women tapped into a dynamic moment, as the expressive trends, that would reach their zenith in the new millennium, were emerging.”

“Painting materialised as a mercurial process in which the lived experience of the artist was imparted through gesture. The authority with which such paintings were composed was expressed through open forms and assured mark making,” he said.

Each artist went on to gain considerable critical recognition across Australia and beyond, with two thirds of the works acquired by institutions like the National Gallery of Australia and highly regarded collectors including Janet Holmes à Court.

“Bush Women: 25 Years On celebrates an important part of WA’s art history, a moment in the early 1990s dominated by Aboriginal women artists from remote Australia,” said FAC Special Projects Curator Erin Coates. “Restaging this exhibition has been part of a larger undertaking at Fremantle Arts Centre to rediscover our own exhibition history and in doing so to better understand the role FAC has played in shaping and supporting the careers of WA artists.”

This exhibition is a first for Fremantle Arts Centre, an ambitious project that uses archived material to understand the role the organisation has played in supporting creative practices and bringing national attention to WA artists. 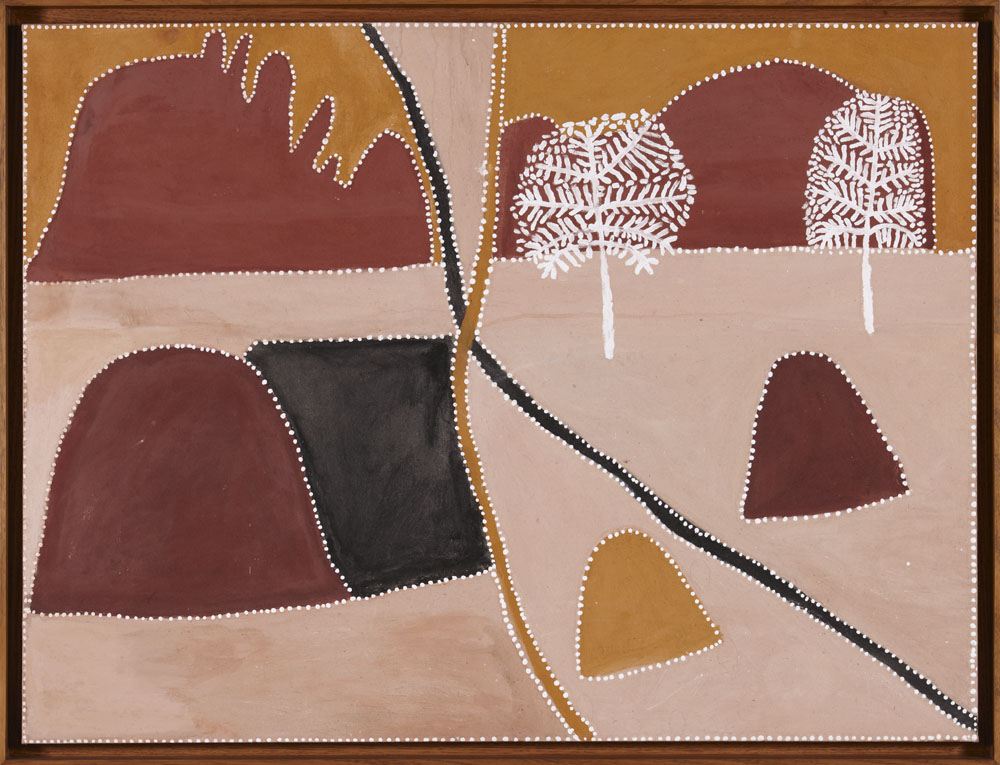 Daisy Andrews (c1934)
Andrews grew up at Cherrabun Station, where her father worked. Sometimes he would run away with his kids and three wives, but would always be picked up by the police, who returned him to the station. Andrews began working there too, cleaning and cooking in return for tea, flour, sugar, tobacco, blankets and clothes. She began painting at the Karrayili Adult Education Centre in Fitzroy Crossing and was represented by Mangkaja Arts. Andrews uses the conventions of perspective associated with the western landscape. Her view of Country is formed by ngarrankanyi (Dreaming), alongside post-contact memories of the massacres of her people and their painful experience with the newly arrived kartiya (Europeans). Her work is made in memory of the way that the landscape is charged with simultaneously personal and cultural memory.

Paji Honeychild Yankkarr (c1912)
Paji Honeychild Yankkarr grew up in the Western Desert, where she married her first husband. After his death and initial trepidation about nearing the kartiya (Europeans), Yankkarr found work at Cherrabun Station washing clothes, watering the garden, cooking at the stock camp and even cutting the lawn with scissors. Yankkarr’s second husband was Boxer Andrews, an artist from Fitzroy Crossing and Daisy Andrews’ brother. Yankkarr began painting later in life at the Karrayili Adult Education Centre in Fitzroy Crossing. She was represented by Mangkaja Arts. Her paintings focus on waterholes, the vital and changing lifeblood of the region. Where concentric circles of dots serve to signify waterholes in traditional paintings, Yankkar’s forms are brightly coloured, made with almost wild gestures and provide a sense of the ‘living’ water and soakages. She takes an elevated viewpoint, her free brushstrokes map out the vitality lent by the water to the surrounding land, whilst always remaining tactile.

Queenie McKenzie (Gara-Gara) (1922 -1998)
Queenie McKenzie (Gara-Gara) worked as a cook on Texas Downs Stations in her early life and spent the whole of her life in the station country of the Eastern Kimberley. Here, the artist married Charlie McKenzie. At one time, the police tried to take her away to Turkey Creek, as was the general policy for mixed-race children, but her mother argued strongly and ultimately successfully for her to stay. When the station eventually changed hands, all Aboriginal people were blocked from accessing their ancestral lands where the station stood. McKenzie has been a leader in the struggle for access to that land for her family and community, even attending the State Parliament in Perth to defend this right. She and Jimmy had no children, but McKenzie was instrumental in ‘growing up’ several adopted kids, and later their grandchildren. Her paintings relate to the rugged topography of the Warmun region and the iconography of the ceremonies during the late 1970s. That land, which she was for many years forced to paint from a distance, was marked by the roads and buildings of the mining and pastoral industries. McKenzie constructs her landscapes laterally with runs of hills and ridges approaching a horizon. Key landmarks are highly stylised and the ochres she selects to render each hill or tree reinforce their symbolic meaning. Her paintings represent the complex reality of European occupation of ancestral lands – introduced land uses and settlements co-existing with Aboriginal people, Law and traditions. By the 1990s, McKenzie represented the only significant female voice coming out of Warmun, which was for the most part male. McKenzie adopted the common schematic of a large area of monochromatic colour bounded by white dots, though her own take on this is to have a more open, more firmly divided (agency) plane than her peers.

Tjapartji Kanytjuri Bates (c1931)
Tjapartji Kanytjuri Bates grew up with her father, siblings and cousins and travelled the country east and north of Warburton. She visited Wanarn, Karrnka, Mantamarru and Wirlkurral and lived for a time in Kalgoorlie. Bates began painting in the early 1990s with the Warburton Arts Project. Much of Bates’ work describes the Tjukurrpa (Dreaming). Her works are bold and she is known for painting by working both in from the edges and out from the centre to create a vibrant, elastic surface. She uses powerful, thick lines that relate to  the application of ceremonial body paint. Bates also uses classical desert symbols, like the ‘U’ shape for a seated figure and simplified images for tools and footprints to imply a narrative over time.

Pantjiti Mary McLean (c1935)
Pantjiti Mary McLean grew up to the west of Yularu on the NT/WA border. She ran away from this area in late adolescence, when her uncle returned from a journey riding a camel, which frightened her. At Blackstone, she met her husband Mr Bates, and they moved to Mount Margaret Mission where her children were raised and she worked at the sheep station. She took up painting and wood carving later in life, after moving to Ninga Mia (in Kalgoorlie). Throughout the 1990s she worked extensively with artist Nalda Searles as part of the Healthway Fringe Camp Project to develop her distinctive painterly style. She began painting in her 50s, creating  sprawling narrative tableaux populated with animated figures, symbols, gestures and activity of everyday life. McLean’s paintings depict episodic evocations from her childhood, which unfold across multiple canvasses. While figures in desert painting were not new, the volume of them in McLean’s painting (up to 70 figures in one painting), as well as the emphasis on their fleeting, human gestures are remarkable and radical.