News The Orange People in Fremantle

Step inside one of the most controversial and outwardly hedonistic religious movements to arrive in Australia in Fremantle Arts Centre’s provocative new exhibition Orange: Sannyas in Fremantle. Featuring newly commissioned multimedia works, including an absorbing virtual reality experience based around the group’s daily meditation practices – the exhibition investigates the legacy of the ‘Orange People’.

Dedicated to its leader Indian guru Bhagwan Shree Rajneesh (1931-1990) – later known as Osho – this highly tumultuous movement grew to global prominence in the 1980s. Fremantle became one of the major centres worldwide as many devotees moved in and many locals converted.

Recognisable for their orange-coloured clothes, disciples or Sannyasins – a term traditionally related to Indian religious discipleship – were typically well educated and wealthy.

The movement combined Western materialism with Eastern spiritualism, garnering intense public interest and controversy, particularly surrounding disciples’ sexual practices. The Orange People were a conspicuous and powerful element in the Fremantle community for a few years until they abruptly de-camped to the south – foretelling the upheaval, scandal and implosion of the international movement.

Curated by FAC’s Dr Ric Spencer and Sannyasin kid Sohan Ariel Hayes, Orange reflects upon the public confusion and fascination surrounding the Orange People and presents an insight into a tumultuous time in Fremantle’s social history from those within the movement.

Alongside contemporary responses the exhibition showcases religious paraphernalia, archival material and interviews from Sannyasin kids, now in their 40s.

Curator Dr Ric Spencer said: “It’s wonderful to see such a colourful and vivacious period in Fremantle’s history brought to life in FAC’s galleries, with newly commissioned work from local artists and contributions from the Sannyas community this will be a lively foray into the world of Osho and 1980s Fremantle.”

Sohan Ariel Hayes grew up in Fremantle’s Sannyasin community from age five to eight, living with his Sannyas parents in the commune on Collie Street. For Orange, Hayes has drawn on his childhood memories of the movement to create Dynamic – a virtual reality work that explores the dynamic meditation practices undertaken daily by Sannyasins, including his parents.

This highly physical form of meditation often took place in a group where meditators wore blindfolds and a minimum of clothing as they screamed, hyperventilated and rolled around on the ground to reach a place of inner peace.

Dynamic will be housed within a padded orange room, complete with a foam floor and ceiling. Viewers will enter a virtual platform where the sun is slowly setting as lights shoot across the sky in time to a percussive soundtrack. Intercut with archival footage of Sannyas meditating, the VR work will encourage viewers to move.

The artist has also collected Sannyas memorabilia to create an intimate reading space which visitors will be invited to peruse in FAC’s Main Gallery.

“Much of Sannyas happened in ordinary domestic environments, in lounge rooms, in kitchens, in gardens, in bedrooms. The installation transforms the fireplaces in the Main Gallery into a shrine and sitting area populated with significant publications, objects and artworks relating to the movement,” Hayes said.

WA artist Loren Holmes will construct The explosive silence, stretching across FAC’s Hallway Gallery. This 2.4m long box features a mosaiced media wall filled with newspapers, magazines and archival material from the late 1970-1980s that explores the emergence and dissolution of the Sannyas movement.

Set behind this public archive is a collection of intimate moments between Sannyasins and occasionally Osho, which can only be viewed through a series of peepholes.

Holmes will also present Where is Utopia?. This visual reconstruction of Rajneeshpuram, the infamous Rajneesh city in Oregon, USA offers an aerial view of the place, with stories of the Orange city and its devotees interwoven through the work.

Established in 1981 by Osho and his followers, Rajneeshpuram grew into a fully functioning city complete with an airport, sewage system, retail outlets and restaurants. The guru was infamous for his consumerist hedonism, epitomised by his collection of 93 Rolls-Royces, earning him the title of “Rolls-Royce guru” in the USA.

In a tongue-and-cheek reference to the dual lives of the spiritual leader, WA artists Dave Brophy and Bevan Honey will broadcast their own Rolls-Royce spirit radio. Featuring a colour-separated print of a model Rolls-Royce, viewers will hear recordings of Osho emanating from ‘inside’ the car’s radio.

Orange will explore the experiences of Fremantle’s Sannyas community through a series of collaborative and interview-based works. Former FAC Print Award winner Poppy van Oorde-Grainger (WA) has collaborated with now-grown Sannyasin kids to create Letting Go. The work reflects on their experiences through dance and music. 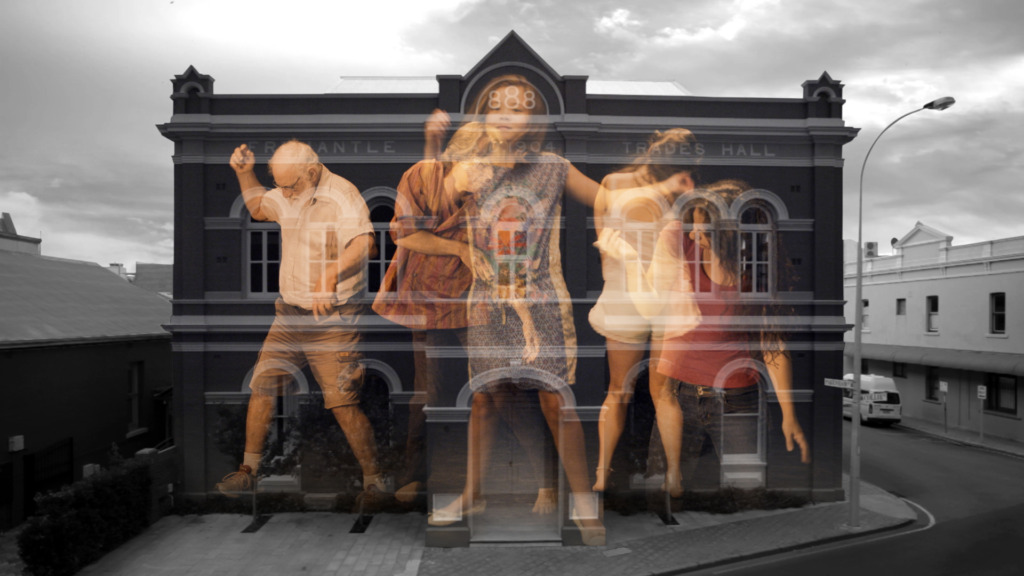 Artist and practicing Sannyasin Naren Farquharson (WA) will present a salon hang of Sannyas paraphernalia, including paintings, drawings, photographs and artefacts dating from the height of the Fremantle movement.

In a new video work, Joseph London will project Sannyasin voices over iconic Fremantle landscapes filmed from dawn to dusk – a significant time and colour scheme for the Sannyasins. These revealing excerpts from those inside the movement offer insight into Sannyas’ ideals of enlightenment, surrender and the master-disciple relationship.

Osho’s principle of surrender as a state of no-mind, no ego and letting go is a key theme throughout the exhibition. Disciples were encouraged to embrace the moment, reaching a point of enlightenment where they released conscious control to respond in a purely intuitive manner.

In reference to this ‘art of surrender’, Joshua Webb has constructed a stunning light sculpture based on Osho’s sacred geometric shapes. Suspended from the ceiling, the glowing orange work offers an absorbing, symbolic take on the movement.

By privileging the perspective of artists raised as Sannyasins, Orange offers rare insight into the inner workings of the enigmatic spiritual group. More than thirty years later, the deeply personal responses speak to the enduring, mixed legacy of the Orange People for both the individuals involved and the port city.

Dave Brophy (WA) is an Australian artist whose practice stems from investigations into the phenomenology of surfing. His work meditates on the experiential, psychological and spiritual exploration of his experiences as a surfer and how these may be translated via the vernacular of visual art. He was highly commended in the 2014 Hatched National Graduate Exhibition, Perth Institute of Contemporary Art; selected to exhibit in HERE&NOW15, Lawrence Wilson Art Gallery; a finalist in the 2016 Blake Prize; and has recently been selected for the 2016 Wyndham Art Prize.

Naren Farquharson (WA) was born in Scotland, studying at Glasgow School of Art and later travelling extensively throughout the world. During his time in India he visited Osho’s original ashram in Pune and afterwards travelled to Fremantle in 1979 where he took Sannyas. In 1982 and 1983 Farquharson travelled to Rajneeshpuram, Oregon for the annual International Sannyas Celebration. On returning to Fremantle he studied at Claremont School of Art and undertook a Bachelor of Fine Art at Curtin University.

J. David Franzke (VIC) is a Melbourne-based composer and sound designer. His work spans film, theatre and installation as well as the production of numerous albums, both as solo works and in collaboration with other composers and sound artists. He has worked with many of Australia’s pre-eminent theatre directors, visual artists and composers, and has collaborated with Cologne-based composer Bernd Friedmann since 1996 on various projects.

Loren Holmes (WA) is a multi-disciplinary artist and designer working across architecture, video, graphic design and illustration. Her practice focuses on the distorted layering of processes and information to provoke questions about perception. Alongside her professional work, which has spanned across Perth, Melbourne and London, Holmes teaches within the Architecture and Integrated Design streams at UWA’s School of Architecture, Landscape and Visual Arts. She holds degrees in Environmental Design from UWA and Architecture from RMIT.

Bevan Honey (WA) is a Fremantle-based artist with an extensive exhibition history, including solo exhibitions at the Perth Institute of Contemporary Art, Galerie Dusseldorf, Lawrence Wilson Art Gallery, Monash Faculty Gallery and Tin Sheds Gallery. He interrogates cycles of boom and bust, failed building projects and consumerist fetishes through his macho machines, wall installations, architectural models, photography and drawings. He has participated in group shows throughout Australia and his work is held in a number of collections, including the Art Gallery of Western Australia, Art Gallery of South Australia, National Gallery of Australia, The Horne Collection and Artbank. In 2009 Honey was the recipient of the Mark Howlett Foundation Fellowship.

Joseph London (WA) is currently completing a PhD in film, for which he is making a long-form documentary on the Sannyasin community in Fremantle. As a child growing up in Fremantle at the height of the Sannyas movement, London was both a naïve observer and curious outsider to the community and its inner workings. His PhD explores the historical documentaries about subjects that are in some way ‘unfilmable’, with landscape acting as a space for absorbing and contemplating that which is beyond representation.

Joshua Webb (WA) has exhibited across Australia, the USA and Europe. His artistic practice has been in parallel to his academic pursuits. He holds a Bachelor of Fine Arts, Curtin University and Master of Fine Arts – Sculpture, Rhode Island School of Design, USA.