Fremantle Arts Centre’s iconic façade will be blanketed by a life-size print of Fremantle Port’s passenger gangway as five leading WA artists examine a world full of movement, consumption and control in a thought-provoking exhibition for Perth International Arts Festival.

Presented by PIAF and FAC, SPAN traverses the emotional, spatial and politicised boundaries of our contemporary environment. This ambitious show sees Fremantle Arts Centre transformed as the galleries fill with large-scale industrial iconography, ribbons of woven hair and a series of absurdist interactions between neighbours.

FAC Curator Ric Spencer said: “The works in SPAN reach out across perceived physical, social and political boundaries, reminding us that lines in the sand are traversed on a daily basis through journeys of choice and necessity.”

“The artists’ work collapses perceived distances through physical and performative processes which often engage their own bodies and those of other participants.”

For Sunley Smith his blackened forms, hand crafted by combustion, are an embodiment of the breakdown of industrialised culture and the accompanying relentless consumption of fossil fuels.

“If we can see our culture as an engine, it is the most direct and best metaphor we have. Engines constantly consume, burn and exhaust as they continually move forward. Our houses, buildings, cities, and circuits are all engines. There is still very little we do on a daily basis that does not involve burning or consuming fossil fuel and resources,” Sunley Smith said.

Clyde McGill’s Dolorosa tells of a family caught between borders. Trading in an unforgiving market place where hope and charity are not the currency, the work speaks to the human impact of political upheaval and resource-driven war mongering.

McGill will suspend amplified wires throughout the gallery, creating an interactive soundscape above a series of paintings. In a series of performances every Friday to Sunday throughout SPAN, he will recount the story of the displaced family’s journey towards asylum as the audience responds, plucking and playing the unusual instrument.

While Sunley Smith and McGill play with the mechanics and emotional cost of constant movement and consumption, Susanna Castleden considers the objects that enable mobility. In 1:1 Airplane Wing and 1:1 Gangway, she has used frottage – a labour intensive process of rubbing – on maps to capture the remains of an aeroplane wing in an aircraft graveyard in the Mojave Desert, and the gangway of the passenger terminal at Fremantle Port.

The monumental means of transport will stand to scale with Castleden’s 1:1 Gangway stretched arrestingly across FAC’s front.

Olga Cironis and Tanya Lee diverge from the boundaries that divide us to articulate those that we live within, crafting bodily based works that are intensely personal.

Olga Cironis’s Mountain of Words is almost an antidote to the cultural erosion inevitable from mobility and travel. The artist has woven together locks of hair from thousands of people across WA, mapping the places from which people come. Threaded together in a growing ribbon of hair, each individual tress reads as a line in a continuously scrolling story – black, red, green, blue, grey, brown and blonde.

Mountain of Words acts as both an art object and performance with Cironis weaving her hair ribbon, which she aims to make 500m long, in FAC’s Hallway Gallery every Wednesday to Sunday on an amplified ticking loom.

In Curtilage, a three-channel video, Tanya Lee challenges the borders of domestic life. Curtilage refers to the spaces between buildings and delineates the boundaries of private and shared space. The performances in Curtilage test these by showing real-life neighbours performing seemingly absurd, intrusive acts.

In one scene a neighbour brushes another’s hair with a comically long brush, extending from one house into the next, while another waits to be fed cereal by a boy across the adjacent balcony. Throughout the series Lee explores what it means to cross social boundaries, transforming intimate acts of cleaning teeth, brushing hair and being fed into a means of unusual connection.

Each of the works in SPAN tell near universal stories – of community, consuming ecological damage, displacement and desperation. SPAN links personal body space, encroaches on the neighbours, and considers decisions of travel and where and how we live.

Olga Cironis has travelled across WA, collecting human hair and the stories of its owners. She will weave in FAC’s hallway every Wednesday to Sunday, crafting a 15m long hair ribbon on an amplified, ticking loom.

Clyde McGill will recount the story of a displaced family and their journey towards asylum as the audience responds, plucking and playing the unusual instrument. Dolorosa sees amplified wires suspended throughout the gallery to create an interactive soundscape. 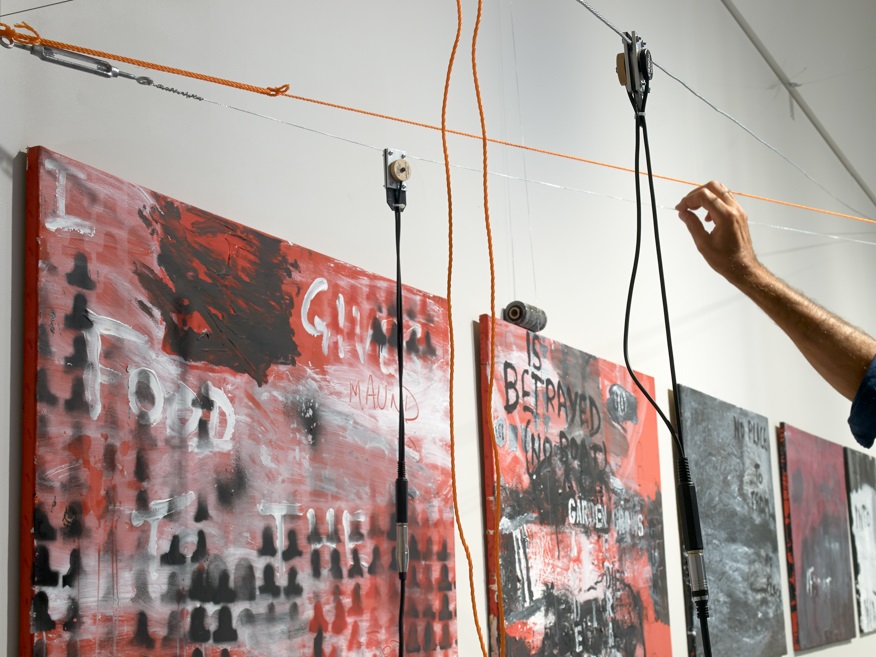 Andrew Sunley Smith lives and works in Fremantle. His work has been included in Glasgow International, Scotland and shown at MCA Sydney, Glasgow CCA, Kunsthalle Mainz, Germany, Brandts Kunsthallen, Odense, Denmark and PICA Perth. His work is held in the national collection of MCA Sydney and the National Library of Australia, Canberra.

Carbon Supremacy was produced with the assistance of FAC’s Artist in Residence program. This project has been supported by the Australian Government through the Australia Council for the Arts, its arts funding and advisory body.

Clyde McGill is a multidisciplinary artist based in Fremantle, working across performance, print, drawing, sound, video and text. McGill’s interests include cultural and social divisions, place and belonging. He is a Fulbright Scholar in Art and his work is held in the National Gallery of Australia and other significant collections.

Dolorosa was produced with the assistance of FAC’s Artist in Residence program.

Olga Cironis is based in Perth. She completed her Masters in Visual Arts/Sculpture and Installation at SCA, University of Sydney in 1996 and is a recipient of numerous art awards and grants. Cironis’ work is held in public and private art collections across Australia and internationally.

Mountain of Words was produced with the assistance of FAC’s Artist in Residence program and residencies across WA.

Tanya Lee is based in Perth. Her work is multidisciplinary, looking at everyday tasks to create humorous, absurd and even futile narratives that subvert the protocols and politics of social environments. In 2016, Lee was selected as a finalist for the John Stringer Prize and also participated in SITUATE Arts Lab in Hobart. Projects in Perth have included Proximity Festival 2014 and her first solo exhibition Personal Space at Fremantle Arts Centre in 2013.

Curtilage was originally commissioned by the Australian Centre for Contemporary Art, Melbourne for NEW16.

Susanna Castleden is based in Fremantle. She is an artist and academic in the School of Design and Art at Curtin University. Her work is held in major national collections and recent awards include the Linden Prize, Burnie Print Prize and Bankwest Art Prize.

Her project has been assisted by the Australian Government through the Australia Council for the Arts, its arts funding and advisory body.